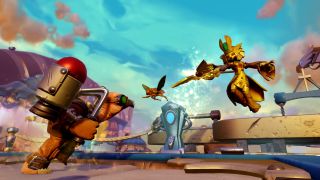 Since the launch of the first Skylanders, the game's developers have received countless pieces of art from fans with ideas for new characters. Over time it became clear that this was a sign of where the franchise should go next - and Skylanders Imaginators was born.

As its name alludes to, Imaginators, which launches later this year, is about drawing of the power of ideas; its hook is customisation.

You can now create your own Skylanders, from the way they look, to the weapons they wield, to the way they sound and even the catch phrases they use.

The team wanted this customization system to be both robust and accessible; there's a wide array of parts to create your Skylander from, and a randomize feature that will conjure an automatic character if you prefer.

Some of the parts are fun, some are serious, some are just plain silly; and you'll collect more as you progress through the game.

Sensei it ain't so

The game also introduces a new character type to the series: Senseis. There are 20 of these new Sensei Skylanders which unlock special areas and weapons, increase Imaginator level caps, and teach special skills to the new Skylanders.

While the game supports all existing Skylander toys, you'll also be able to upload your creations and take them with you. This is done using a Creation Crystal, a new figurine that will be included with the Imaginators starter pack.

However, you'll only be able to load one of your creations onto a crystal, which feels a little too restrictive - we reckon players are going to spend a lot of time coming up with different characters.

The starter pack also comes with two other figurines: the Golden Queen - which Skylanders fans should already know - and Master King Pen, one of the new Senseis.

"Usually the only kind of fan feedback you get is forums," Toys for Bob executive producer Jeff Poffenbarger told TechRadar, speaking about the fan art that inspired Imaginators.

"There are fanbases that aren't on the internet as much - they're not as internet savvy... so what we get is old-fashioned letters from people, and just these awesome drawings that are super inspiring."

"There was one that was business Skylander, it was a guy with a briefcase and a suit."

Through the game you'll collect different parts for your characters, which are classed as common, rare, epic or mythic.

"We wanted to have the ability, if you so choose, you can dive deep down into things and change the color and the size of just little components," said Poffenbarger, "but on the surface it's pretty easy to access things and create different characters."

Sometimes it's easy to be cynical about toys-to-life in general, but Poffenbarger assures us that keeping all Skylanders toys supported is a conscious consideration by the team.

"We certainly respect people's collections, including this making sure all the previous characters were playable - it's been an important aspect of development. And certainly going forward we want to make sure these characters are supported as well. It's always been a core tenet of ours to do that."

Skylanders Imaginators will launch October 16 in North America, October 14 in the UK, and October 13 in Australia, on Xbox One, Xbox 360, PS4, PS3 and Wii U.