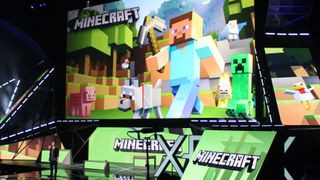 The blocky world-building fun of Minecraft seems like a natural fit for virtual reality (and augmented reality) but it's taken a while for Mojang's massive worldwide hit to make its way to the fledgling platform - two years ago original creator Markus Persson (aka Notch) ditched plans for a VR version after Facebook acquired Oculus.

Since Microsoft bought Minecraft a VR adaptation has been back on the cards, and Mojang team member Tommaso Checchi has tweeted that Rift support will be added to the Windows 10 version of the game next week.

That means if you've got Minecraft installed on your Windows 10 machine, at some point next week an upgrade will enable you to plug in your Oculus Rift and wander around the chunky, pixelated environments you've created with the aid of an Xbox One controller (the Oculus Touch controllers aren't out until later this year).

If you've got an older version of the game or have picked it up for the Mac then Microsoft is letting you pick up the Windows 10 beta version free of charge via the Mojang website.

Apparently the update also includes some significant new features that let players "dramatically" change the rules of the game, so there's something to look forward to whether or not you've splashed out several hundreds of pounds (or dollars) for the latest in VR entertainment.

This isn't actually Minecraft's debut in virtual reality, because you can already play it on the Samsung Gear VR, but this is the full fat, high-end VR experience rather than one adapted for mobile. If you've got an Oculus Rift at home then keep your eyes on your update queue from Monday.

Is your gaming PC ready for virtual reality?: