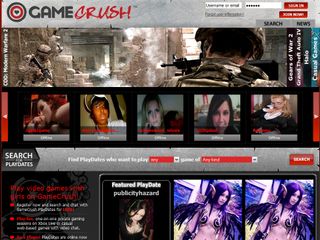 What's in it for the girl gamers? Cash

From time to time a service launches that makes us wish the aliens would hurry up and erase us all from the planet.

No, not Chatroulette. We're talking about GameCrush, a new service for Xbox gamers (and web gamers) that enables you to chat with girls while waggling your analogue stick.

The idea is simple enough. Instead of logging on for multiplayer with a bunch of 14-year-old boys who'll bore you senseless and call you a "fag", you can log on to play with - and talk to - a girl instead.

You may be wondering what's in it for her. The answer, as you've probably guessed already, is cash. GameCrush's PlayDates, as they're called, earn up to $30 per hour. PlayDates "can have fun, talk trash, do all the things you'd normally do playing games online - only now you're getting paid for it!"

Hmmm. Paying women to talk to you? Isn't that what the ads for HOT GRANNY ACTION in the back of movie magazines and men's magazines are for?

Apparently not. GameCrush's ethos is much purer than that. It's designed to engage the brain, not engorge the groin. That's why the girls can choose to offer chats ranging from "flirty" to "dirty" or, if they're feeling particularly empowered, "flirty and dirty".

It's why "for online casual games you'll need a webcam", and why "because of this video component, these games pay a bit more than Xbox Live games." We bet they do.

Assuming the whole thing isn't an Onion-style gag, it's all rather depressing and tawdry. We're particularly baffled by the thought process behind it, because the Xbox games mentioned aren't of the Dead Or Alive Xtreme variety, where scantily-clad lovelies bounce around on a beach, or Mass Effect 2, which has the odd romantic subplot (or plenty of opportunity to scan planets for minerals if you just want to make the controller vibrate like crazy).

Either choice would be pretty weird, but at least they'd make some kind of sense. But according to the games you'll be sharing with your PlayDate, on Xbox at least, are first-person shooters. According to the site, the Xbox games GameCrush will support at launch are games "including Call of Duty 4, Gears of War 2, Grand Theft Auto IV and Halo".

Is it just us, or is there something deeply disturbing about having "flirty and dirty" chat with someone when you're busy shooting people in the face? Isn't that in the same territory as calling sex lines while wearing people's skins as a coat?

And anyway, it's far too expensive.