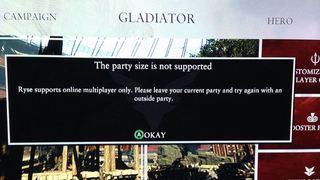 The Xbox One is not a perfect system, but according to one Microsoft executive "things will get better."

Xbox One users are supposed to be able to play multiplayer games while they're in a party chatting with friends, but players are receiving errors instead.

One user posted an image of one such hiccup on Reddit, and other users complained about the friends, party and achievements UI on the new Xbox console.

One suggested bringing back the guide system from the Xbox 360, and that's when Microsoft Xbox Live Director of Programming Larry "Major Nelson" Hryb piped up.

"I had a meeting today about much of this and I can say that things will get better," Hryb said.

"I can't offer a timeline of a list of what till be addressed first, but we are aware of the issue and things will get better."

It's not surprising to hear a company say that about its own product, but it's nice to know that at least Microsoft is aware of some the Xbox One's issues.

And it's even more interesting to consider exactly when Hryb popped up, just as someone suggested that the Xbox 360's convenient guide UI feature make a return.

It allowed users to access friends lists, achievements, parties, and more without having to go all the way back to the system's dashboard.

But on Xbox One, users have to open a completely separate app to access those features.

Going back to the dashboard and opening different apps on the new console is fast and relatively painless, and gameplay is now suspended in the background when users do so. But it still might be easier if those features could be accessed without having to exit the game at all.

Microsoft could conceivably add an Xbox 360-style guide to the Xbox One's UI in a future update, so it's nice to hear that they're talking about these things.