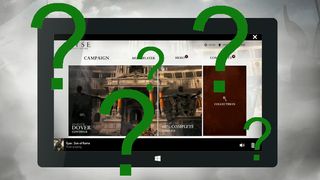 Week in Gaming comes to you a day later than usual. But don't worry, that only means we're older and much, much wiser. IFA has dominated the news wires for the better part of the last seven days and TechRadar has been frantically running around Berlin to bring you our first impressions of everything new and interesting.

But the world of gaming didn't halt so Samsung could tell us about its new smartwatch. Not at all. This week has been all about secret weapons; if you thought we'd seen everything the PS4 and Xbox One had to offer, think again.

The Xbox One will be getting an updated version of Microsoft's SmartGlass app before Christmas. We chatted to Xbox Live general manager Ron Pessner about the second screen experience and how it will improve on what we've seen so far. We're told it's three and a half times faster than the Xbox 360 and can match 16 devices to a single Xbox One.

Cool. But what are we going to do with it?

The second screen experience is a difficult fish to fry. It still feels like developers are treating it as an afterthought. Xbox isn't the only one - the PS3 is also doing it with games like Beyond: Two Souls, and that torch will be passed to the PS4, while the Wii U has been doing it from the start.

But I've always felt that "second screening" only works well when the TV experience is passive. Watching sports is perhaps the best example how this interaction can feel valuable. Or an even more basic example would be when I simply want to check IMDB to find out where I've seen that actor before...

When you've got a game controller clutched in your hands, using another device alongside still feels awkward and clunky. Just because we're a generation of tablet and smartphone addicts doesn't mean they have to bleed into everything we do. You want to show me maps and inventory on my iPad while I play? Boring!

When second screens veer into something more integral is in multiplayer. Take Fable Legends - the single player SmartGlass stuff sounds a bit mundane but multiplayer uses it to allow one person to play the villain and control hoardes of enemies through the touchscreen interface. Ok, it's not mind blowing, but its more of a step in the right direction.

This was the Wii U's manifesto when Nintendo showed it off back in 2011. Two years later and those experiences are yet to really take off.

So when it comes to interacting with the Xbox One's TV features and general UI, I don't doubt for a second that SmartGlass will prove an integral, useful and relevant addition to the experience. But until I see it used for something truly powerful in terms of gaming, I remain skeptical that the second screen will tempt me to put down the controller. Prove me wrong, guys.

So the Xbox One has SmartGlass, what's Sony's response? Well the final piece of the PS4 puzzle may be a virtual reality headset, rumoured to be shown off at the Tokyo Game show.

Is it a coincidence that it comes the same week that Sony announced its updated 3D headset, the HMZ-T3W? We strapped it on at IFA and found that while great at creating that "real cinema" experience, it required a lot of faff to get there.

The other difference is that the image is fixed and follows your eyes when you turn your head. The dedicated PS4 version sounds like more of an Oculus Rift deal with full field of view perspective. Let's hope this is the case and that it arrives without any of the concerns we have with the MHZ-T3W.

But hey, maybe this isn't the PS4's secret weapon at all. Maybe the killer app will be pure nostalgia, with news that Crytek has given its blessing for TimeSplitters Rewind on the PC - and that a PS4 version is likely to arrive alongside.

Stuff your SmartGlass and virtual reality, I'll take monkeys with miniguns any day of the week.

And with that, here are some links from around Future...

Hail Caeser and everything sir! CVG goes to war with our epic Total War: Rome 2 review

We came, we saw, and we played a whole lot of games. Which ones stood out in the PAX crowd? Here's the 10 best games of PAX Kenji Inafune is starting up a brand new IP, but something looks familiar

Take out your magnifying glass and see the 10 ways Mighty No.9 is exactly like Mega Man

We have two new entries in our list of the top ten best Wii U games. Where did The Wonderful 101 and Rayman Legends go in?

Recyling is good! Moviemakers think so too, find out how in our eco-friendly 30 Reused Movie Props feature