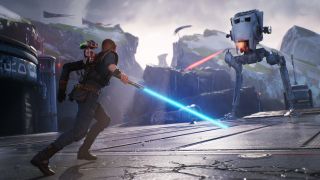 Anyone that has the faintest idea about the world of games won’t have to venture far before discovering that Electronic Arts is not too popular in the games sphere. Amazingly though, one studio acquired by the publisher has been chugging away since 2010 and has built up a reputation that no other developer in EA’s catalogue can today claim to. And that’s Respawn Entertainment.

Created by former Infinity Ward co-founders Vince Zampella and Jason West, the studio has launched four AAA titles to ever-growing critical success, though a favorable outcome has not always been on their side.

Birth of a Titan

In 2014, Titanfall was the first Respawn Entertainment title to make its debut, a multiplayer sci-fi shooter that featured large mechs known as Titans. After huge acclaim in the build-up – winning over 60 awards at E3 2013 alone – the longevity of the game and lack of DLC sales were not up to the company’s aspirations. Still, 10 million figures (It’s never been made clear if this was sales, unique players or elsewise) were something to be proud of, even if not considered a ‘success’ by publisher EA’s metrics.

Round two for Respawn arrived in the form of a Titanfall sequel in 2016, with an original campaign and more platform availability than ever. While critics revered the outing, the choice to launch one week after (soon to be) sister-studio EA Dice’s Battlefield 1 and one week before juggernaut Call of Duty made its way to shelves, resulted in the game heavily under performing. Four million units shipped against Battlefield 1’s 15 million within the same year, left Respawn as a casualty.

Three years on (minus one unsuccessful attempt at cracking the mobile industry), the LA-based studio returned with not one but two full experiences that look to have finally achieved both critical and sales status.

“It has definitely been a very exciting year for Respawn!” Apex Legends game director Chad Grenier tell us.

Titanfall spin-off Apex Legends is the first battle royale title from the studio, while Jedi: Fallen Order is the first single-player story-driven Star Wars game since the deal was struck with Disney back in 2013.

“The Apex team had been working for a long time on Apex Legends in secrecy, so finally having the game released and be well-received has been pure joy for everyone involved.” Grenier says.

“It was also a privilege to see the Star Wars Jedi: Fallen Order team’s progress throughout the year, and we are so thrilled for their team and the game’s success. Respawn is riding on a high right now, it’s quite unbelievable.”

As Grenier states, no one outside of EA was aware of Apex Legends’ existence, taking a huge risk to stealth launch on February 4, 2019. One week later, more than 25 million players had logged on, but was this reception expected?

“Absolutely not, but it's been a real thrill!” says Grenier.

“We felt we had a great game on our hands but you never really know how well a game will be received. As developers we can sometimes be too close to a project or, much like other forms of art, only see its flaws. We were caught totally off guard when the game launched."

Apex Legends went on to have the best launch month of any free-to-play game, estimating at $92 million in revenue for February. More recently, the title passed 70 million players confirming the game’s longevity from its initial risky move. Stealth release is something many developers would never dream of, with the fear stemming from the lack of marketing ahead of time. Not for Grenier though.

“The trepidation was actually coming from the thought of doing a traditional release with reveals and trailers before launch since we had a great game set in the Titanfall universe but without Titans,” he says

“We knew that if players could just play the game and experience it for themselves, they would probably love it, but if we had teased the game ahead of time there would have been a lot of questions and discounting the direction before even trying it.

“By doing a stealth release we were able to let the game speak for itself on day one. Going this route proved additional challenges, however because of the added secrecy. It was a bit of a gutsy move, so we’re glad it paid off.”

Star Wars on the other hand, went the traditional route but did take some elements from its counterpart.

“We certainly took inspiration from the wall-running in Titanfall and the studios commitment to overall responsive controls that just ‘feel good’, says Asmussen.

Overall though, Respawn’s approach with Stars Wars was similar to the entirety of their library: “make games that feel connected to the player be reducing lag/friction in controls and creating snappy and fun mechanics”.

Another asset shared across both titles is their diverse list of characters. Lifeline, Cal Kestis, Gibraltar, Cera Junda, Bloodhound, Greez Ditrus etcetera, all come from different backgrounds representing communities that some would consider overlooked.

Speaking on Apex, the game director believes that “legends are a key part of the game” with plans to “create diverse and personable ones” continuing going forward.

“Our character team is filled with some of the best talent I’ve ever seen, and I feel like they’ve finally hit their groove,” Grenier tells us.

“We do playtests every day at the studio and it's almost like a different game sometimes when we have a handful of additional Legends in the line-up that haven't been released yet. The future of Legends in Apex is strong. I can’t wait for a certain one to hit the game soon. Sorry, no spoilers!"

With so many attributes shared and both development teams working in-tandem with, is it possible that we would ever see a crossover? Possibly a new Legend inspired by a Jedi? Already an Easter Egg has been discovered by the community referencing Star Wars pilot Greez in Apex Legends and a Star Wars inspired skin for Pathfinder has been released.

We got a winner! Mirage’s great-grandfather is named after the lovable food obsessed pilot of The Stinger Mantis: Greez Dritus. Not as cool as killer Dummies but this was before the launch of JFO - so there you have it!! Thanks for playing, friends! #ApexLegends #JediFallenOrder https://t.co/xNwqZIKfX1 pic.twitter.com/k52qlWVm9WDecember 6, 2019

“I would love it if we did get a chance to collaborate” says Asmussen.

“I can think of a number of ideas that come naturally.  Of course, with everything we do on the Star Wars team, it would need to align with the Star Wars galaxy, continuing the incredibly collaborative process with partners at LucasFilm.”

For the time being though, the group is “100% focused” on maintaining both games and, according to Amussen, are more than “capable of getting the job done”.