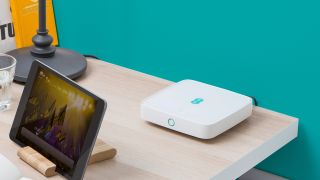 EE has launched its new 4GEE Home Router, the first device from the mobile network that comes with Cat 7 Ethernet ports for connecting wired devices, and which is also a mobile Wi-Fi device and compatible with 4G+.

The aim of the 4GEE Home Router is to provide rural areas of the UK and Ireland, which can't get traditional broadband internet connections, with fast download speeds thanks to EE’s 4G network. Up to 32 devices will be able to connect to a single 4GEE router, with speeds of up to 90Mbps.

According to a report by Open Signal, 904,000 homes in the UK have an internet connection slower than 10Mbps, while EE’s 4G network provides average download speeds of 30Mbps.

EE claims its 4G network currently covers 83% of the UK (an area which houses 99% of the population), with the company aiming to cover 95% of the UK’s landmass by 2020, so the 4GEE Home Router could be a viable alternative for many people who suffer from a poor (or non-existent) internet connection.

Also, if you live in an area covered by EE’s 4G+ network you could receive download speeds comparable to fibre broadband.

It’s certainly more expensive than traditional broadband deals, but if you’re stuck without internet then you’ll probably just be glad that you can finally get a high-speed connection where you live.