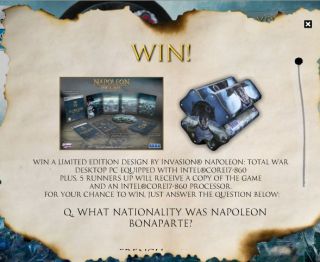 Napoleon: Total War is the new chapter in the Total War series, where you assume the role of French Emperor Napoleon Bonaparte, tactically assemble armies together and get to battle it out in real-time all across the world.

Critically acclaimed and only on PC, the game is a must-have for strategists and also for those who like a bit of multi-player action – as Napoleon: Total War has a new 'drop-in' multiplayer campaign mode.

To celebrate its release we are giving away, in association with Intel, a limited edition PC, equipped with an Intel Core i7-860 processor.

Not only that, five runners-up will receive a copy of the game and an Intel Core i7-860 processor.

Gaining a 9.1 score by CVG, which calls the game "a defining example of what great strategy games do best," Napoleon: Total War is out now in the shops (courtesy of Sega) and available to download through Steam.

This competition is now closed. Winners to be announced shortly.

Please note that this competition is only open to UK residents over 18 years of age.