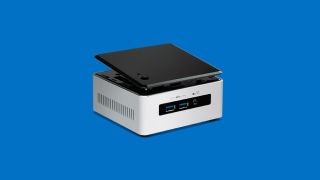 Intel is yet to announce its next-generation NUC micro-PCs, but that hasn't stopped the new machines from cropping up on the chipmaker's website ahead of schedule.

As noted by Legit Reviews, the diminutive desktops are more than likely the ones rumoured to launch in early 2015 with Intel's new Broadwell processor inside.

The NUC micro site shows that the new systems have two USB ports (one yellow, one blue) on the front alongside an audio/headphone jack. It's available in three different chassis, one of which stands on its side and is slimmer and taller than the other two.

Intel's NUC systems come with basic components such as a processor and integrated graphics, allowing users to fit them with storage drives, RAM and other components.