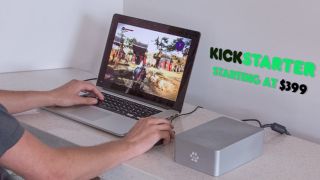 External GPU enclosures are all the rage these days when it comes to ramping up the pixel shifting power of your laptop, and a fresh option has popped up on Kickstarter to tempt MacBook Pro owners.

The Wolfe and Wolfe Pro are the two boxes on offer, with the former boasting an Nvidia GeForce GTX 950 graphics card, and the latter upping the ante to a GTX 970 GPU.

In terms of ports, you get three DisplayPorts 1.2, an HDMI 2.0 port, plus a Thunderbolt connector. Maker Wolfepack notes that there will be Thunderbolt 2 and Thunderbolt 3 versions available, but only those who purchase their device via Kickstarter will get the choice of a TB2 enclosure.

That option will be available in a post-campaign survey, and the company says that Wolfe Pro buyers will 'more than likely' be offered the choice to go for a current-gen GTX 1060 GPU (rather than the GTX 970) as well.

The Wolfe Pro will give your MacBook enough oomph to cope with the demands of VR, and on the Kickstarter page, the manufacturer highlights a few benchmarks. These include Heaven which hits just under 15 fps on a MacBook Pro 13-inch with Intel Iris Pro 5200 integrated graphics, compared to almost 75 fps with the Wolfe Pro. Obviously, that's the difference between horribly stuttering gameplay and smooth as butter.

Do note, though, that for those hooking the GPU up via Thunderbolt 2, bandwidth restrictions will limit the performance you'll get on your notebook's display – although there will still be a big increase.

These GPU enclosures are expected to ship in March 2017, although the DIY version and early bird orders will go out in February, or that's the plan at the moment barring any delays.