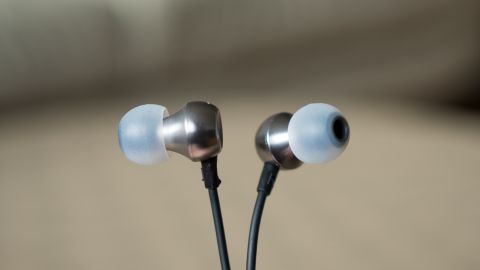 The RHA MA390 is a pair of budget earbuds that feel premium. Their aluminum driver housings and braided cable feel like they can withstand years of abuse. While their bass-heavy sound won’t please audiophiles, most listeners will enjoy their warm, rolled off presentation.

While wired headphones may be way of the dodo with disappearing headphone jacks, there are still plenty of reasons to go wired. Two of the biggest reasons is sound quality and price. While there are cheap wireless headphones out there, they sound much worse than wired headphones for the same price.

In the budget in-ear headphone category, you usually sacrifice sound and build quality for price. However, there are rare gems that are affordable, sound great, and are built well. The RHA MA390 is one of those headphones.

While the RHA MA390 is the cheapest headphone the company makes, it doesn’t sacrifice on build quality, design, or sound: These headphones are beautifully crafted out of aluminum, feature a braided cable, and a universal remote that works with Android and iOS. While not perfect, the RHA M390 are an excellent value in the budget in-ear category.

The RHA MA390 do not feel like $30 (£20, about AU$39) headphones. Its driver housings are milled out of solid pieces of aluminum into a trumpet shape. While its slightly more expensive sibling, the RHA S500u, have smaller driver housings, the MA390 are still quite compact and light for comfortable listening.

The RHA MA390 features a braided cable that resists tangling as well as a straight 3.5mm headphone termination. You can tell where RHA cut costs with the MA390 versus the S500u as the headphone jack on the MA390 is rubber instead of aluminum.

We were pleasantly surprised to see how many accessories RHA shipped with the MA390. The package includes a variety of ear tips, a shirt clip, and a mesh carrying pouch.

Sound quality of the RHA MA390 can be summed up by two words: warm and soft. Audiophiles will not be impressed with its sound but audiophiles won’t be buying $30 headphones. For most listeners, though, the RHA MA390 will sound just fine and many may prefer its bass-heavy sound.

Bass is what stands out the most about the RHA MA390’s sound signature, for better or worse. Bass response bleeds into the mids, which means these aren’t the best for vocal music. However, the intense bass impact make the RHA MA390 fun for listening to pop, hip hop, and electronic music.

Highs are rolled off, which means you won’t get the ultimate detail in the upper audio spectrum. However, it also means that you won’t be fatigued from long listening sessions. The slightly more expensive RHA S500u has more revealing highs, but some listeners may find this slightly sibilant and fatiguing. The softness of the RHA MA390 may not be the most revealing but you’ll be able to listen for hours without discomfort.

Interestingly, the RHA MA390 feature a wider soundstage to our ears than the more expensive RHA S500u. However, the S500u sound slightly better in all better aspects like tonal balance and resolution.

If you’re looking for slightly better sound quality but are still on a tight budget, the RHA S500u offer better tonal balance and resolution for only slightly more money. The excellent 1MORE Triple Driver headphones are also an excellent choice for those who can stretch the budget to $80.

For the money, the MA390 offers a premium build and a ton of accessories. While its bass-heavy sound may not be to everyone’s liking, those who want a fun sounding headphone for pop, hip hop and electronic music will be pleased.