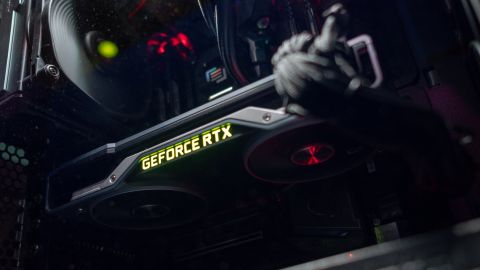 Whether you’re looking for a more powerful graphics card or get a jump start on Nvidia’s vision of a ray-traced future, the GeForce RTX 2080 Ti is the world’s most powerful GPU on the market.

The Nvidia GeForce RTX 2080 Ti is an exceptionally powerful graphics card that will exceed 60 fps in 4K in all the best PC games without blinking. Not only is it dramatically more powerful than the Nvidia GeForce GTX 1080 Ti that preceded it, but it’s also the best graphics card for pushing the boundaries of computer graphics forward with ray tracing technology and AI-driven Tensor cores.

The Nvidia GeForce RTX 2080 Ti offers a look into an elite world of graphics technology, and if you want in, you're going to have to pay the steep price. Once, you get in, too, you're going to need the best processor and gaming monitor to really take the Nvidia GeForce RTX 2080 Ti to its potential. However, if you're after that elite gaming experience, you won't find a more powerful laptop in the mainstream.

Still, while AMD has already showcased its new mid-range AMD Navi cards, they haven’t so far released anything to really contend with the RTX 2080 Ti’s performance. The highest-end GPU they’ve shown us so far is the AMD Radeon RX 5700 XT, which is going to be in direct competition with the Nvidia GeForce RTX 2070.

Though it costs almost twice as much as the graphics card its replacing, the Nvidia GeForce RTX 2080 Ti does deliver some breathtaking specs with 11GB of GDDR6 VRAM, 4,352 CUDA cores and a boost clock of 1,635MHz. It’s all thanks to Nvidia’s first ever self-implemented 90MHz factory overclock. Comparatively, the Nvidia GeForce GTX 1080 Ti sports 11GB of last-generation GDDR5X VRAM, 3,584 CUDA cores and a 1,582MHz maximum frequency.

This GPU also features two additional types of cores its predecessors never had, in the form of RT and Tensor cores. The RTX 2080’s Ti’s 68 RT Cores power ray tracing, which allows this graphics card to render much more complex, real-time lighting scenarios and natural shadows than the 1080 Ti ever could.

In the meantime, 544 Tensor Cores bring artificial intelligence (AI) into the mix, which Nvidia hopes to use for more efficient anti-aliasing. According to Nvidia, Turing is eight times faster at processing anti-aliasing than Pascal via machine learning. Additionally, Tensor Cores drive a new technology called Deep Learning Super Sampling, which can increase resolution while applying anti-aliasing at the same time.

During our testing, we ran the Epic Infiltrator benchmark, which stacks a version of the experience up temporal anti-aliasing against DLSS. The former was able to maintain a frame rate between rendered a minimum of 34 frames per second and maximum of 117 fps, while the later churned out between 35 and 89 fps.

You’ll also find a surprising number of new ports on this new GPU. The high-bandwidth connector Nvidia has used for years for multi-card setups has been replaced by NV Link, promising 50 times the transfer bandwidth of previous technologies. The RTX 2080 Ti specifically has two of these connectors to deliver up to 100GB of total bandwidth, which you can use to power multiple 8K monitors in surround.

Around the back, there’s also a newly added USB-C video out port that has become prevalent among new monitors. The USB-C 3.1 Gen 2 port supports UHD video and also pipes out 27 watts of power, so you may only need to plug in one cable to power up future virtual reality headsets.

The Nvidia RTX 2080 Ti – and the whole Turing-based RTX series, for that matter – brings the first dual fan cooling system ever seen on an Nvidia Founders Edition (a.k.a. reference) card.

Typically, first-party cards have always come with a blower-style cooler that essentially sucks in cool air through its fan to funnel heat through the back of the card. A dual-fan system, meanwhile, basically takes cool air and splashes it against an open heatsink to exhaust heat in every direction.

While blower-style coolers are good for isolating heat from the rest of your components, their cooling capacity has been historically much smaller, because a single fan can only move so much air. Dual and multi-fan systems, on the other hand, can move much more air, but end up leaving more accumulated heat inside your PC case. This debate among many in the computer industry as to which is better has yet to be resolved.

Aside from the new fans, the Nvidia RTX 2080 Ti also sports a full-length vapor chamber to cover the entirety of the card’s printed circuit board, or PCB. With this and the dual-fan system, Nvidia has promised the whole system works to deliver ultra-cool and quiet performance.

During our own tests, we found the Founders Edition’s new cooling system to work just as promised, keeping the GPUs running cool and quiet. However, it seems like the new coolers were much more of a necessity rather than Nvidia let on, as both the RTX 2080 Ti and RTX 2080 ran a few degrees hotter than their predecessors – even while at idle.

Even though neither graphics card went above 80-degrees Celsius, we can imagine they would have overheated easily, had they come equipped with a standard blower-style cooler.

After benchmarking the card thoroughly, we can confidently say that the Nvidia RTX 2080 Ti is currently the most powerful consumer graphics card in the world.

It not only runs laps around the GeForce GTX 1080 Ti, but also outpaces the Nvidia Titan Xp – and not just by a small bump. Nvidia’s new flagship GeForce card holds a 2,000 point lead in almost every synthetic benchmark and delivers at least 10 more frames per second (fps) in each of our gaming-based tests.

Nvidia was already comfortably ahead of AMD, and now it’s almost as if the company jumped into the next galaxy with the RTX 2080 Ti. The $799 (£749, AU$1,199) RTX 2080 is the only graphics card that comes close, and consistently nips at the Nvidia RTX 2080 Ti’s coattails in all benchmarks. However, the RTX 2080 fails to completely break the 60 fps barrier of 4K gaming.

Outside of benchmarks, we could finally play Destiny 2 at an incredible 70 to 100 fps while the game was running at 4K HDR on Ultra. Meanwhile, the recently released Shadow of the Tomb Raider played at a fairly high 50 to 55 fps with similar 4K Ultra settings.

Regrettably, outside of ray tracing demos, there were no games that actually support it at the time of our review. We couldn’t say, therefore, how Nvidia RTX affect performance. What we can tell you is that Shadow of the Tomb Raider and other games with Nvidia RTX turned on looks stunning with ray tracing turned on.

At Nvidia’s GeForce Gaming Celebration event at Gamescom 2018, we saw Nvidia RTX deliver much more realistic with different intensities everywhere depicted in a stony ruin in the rainforest. We also just gawked at the walls, seeing them shimmer as light reflected and refracted off of them.

In terms of frame rate, an early build of Shadow of the Tomb Raider ran at a mostly consistent 40 to 50 fps, which is impressive giving the game is running on a single GPU – on top of all the new ray tracing techniques.

We also played Battlefield V and Metro: Exodus with Nvidia RTX turned on, and saw performance run in excess of 100 fps at 4K and Ultra settings. You can see our Battlefield V with Nvidia RTX gameplay above (we shared it with PC Gamer), which was captured through the Nvidia GeForce Experience app.

Surprisingly, to reach this level of performance, the Nvidia RTX 2080 Ti actually draws less power than the Titan XP and 1080 Ti it outpaces. That said, this GPU does draw twice as much minimum power and gets hot quick, so be sure your PC is ready to exhaust all that heat before installing it.

Whether you’re a PC gamer who has been waiting in the wings for a more powerful graphics card or you truly believe in Nvidia’s vision of a ray traced future, the Nvidia RTX 2080 Ti is the new top dog in the world of graphics cards and a sound investment for you.

After seeing the realistic lighting that ray tracing can produce, we honestly don’t want to go back to traditionally rasterized, murky puddles where we expect there to be incredible reflections. Plus, more and more games are joining the list that support the new technology, with Cyberpunk 2077 and Call of Duty: Modern Warfare being the latest ones to do so.

Tensor Cores, on the other hand, look like they’ll pay long-term dividends by reducing the overhead of anti-aliasing and super sampling.

The prohibitively steep price of the Nvidia RTX 2080 Ti is going to put the brakes on for a lot of interested users. The $799 (£749, AU$1,199) RTX 2080 is an almost equally appealing graphics card featuring stunningly close performance to Nvidia’s flagship card.