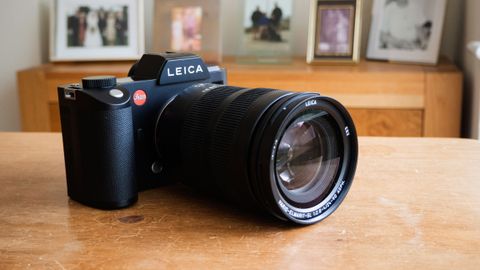 The SL has some great technology and lovely build quality. It can also produce superb images, but it's too big and heavy in comparison with the CSC competition. The only directly compatible lens to date is also very large and does not have a constant maximum aperture.

Leica has a reputation for building high quality cameras and lenses, and strictly speaking it was the first company to introduce mirrorless digital system cameras, because all its M models are rangefinders – which don't have reflex mirrors.

However, it wasn't until the Leica T (Typ 701) was introduced in April 2014 that the company had what many would consider a modern mirrorless or compact system camera (CSC). While the T follows Leica's minimal design ethic, many were surprised by its low button count and the heavy dependance on the touchscreen for making settings selections. This seemed a major departure for a company that tends to make cameras with traditional controls.

Now we have a second mirrorless system camera, the SL (Typ 106), and instead of the APS-C format sensor of the T, inside is a full-frame CMOS device with 24 million effective pixels. What's surprising is that the new camera has the same lens mount as the T. This means that the existing T lenses are directly compatible, but because they are only designed to cover an APS-C sized sensor, mounting one sets the SL to APS-C crop mode and it produces 10Mp images. It's like mounting a Nikon DX lens on an FX camera.

Leica already has an adaptor that allows M-mount optics to be used on the SL, but there will be new ones to enable Leica S, R and Cine lenses to be used.

Leica is rebranding the 'T mount' the 'L mount' and lenses that are compatible with the T will be labelled TL, while full-frame lenses will be badged SL. It's also possible to mount SL lenses on the T. Clearly this move was planned long before the SL's announcement, so it seems a little odd that the rebranding is necessary.

The Leica T doesn't have a viewfinder built in and unless you invest in the optional external unit images must be composed on the rear screen. When the Leica Q (the company's full-frame compact camera) was unveiled, Leica showed how good an electronic viewfinder can be. The viewfinder in the SL has an even more impressive specification; it's a 0.66-inch unit that has 4.4-million dots (the Q's has 3.68 million) and a magnification of 0.8x (the Sony A7R II and Sony A7S II viewfinders are 0.5-inch devices with 2,359,296 dots and 0.78x magnification).

If the idea of a 'serious' Leica camera with an electronic viewfinder (EVF) has you choking on your tea, I probably shouldn't mention that it has a 2.95-inch screen with 1.04million dots that's touch-sensitive. But it does.

Naturally both the screen and the EVF can display the live view image with exposure simulation as well as focusing peaking, clipping/zebras and a level.

Leica has coupled the SL's sensor with a Maestro II processing engine – the same as is used in the medium format Leica S (Typ 007). This means it's capable of handling large files and as a result the SL can shoot at up to 11fps (frames per second) with the 2GB buffer enabling 33 DNG or 30 simultaneous JPEG and DNG file bursts. In addition, 4K video can be recorded in MP4 or Mov format at 30fps. Lower resolution video can also be recorded and there's a maximum frame rate of 120fps at Full HD for 4x slow motion playback.

Images are saved to SD type media. There are two card slots with one being compatible with UHS II and the other UHS I. An HDMI port also enables videos to be recorded externally. When 4K footage is output over HDMI 1.4 it's recorded in 4:2:2 10-bit format; this drops to 4:2:0 8-bit format when recording internally.

As you would expect with a professional-level camera, there are program, shutter priority, aperture priority and manual exposure modes and no automatic scene modes. It's possible to tailor the look of JPEGs with contrast, saturation and sharpness adjustments while videographers can make use of the V-Log L gamma option to produce flat footage that's intended for grading.

Like all respectable modern compact system cameras, there's Wi-Fi connectivity built in and the new free Leica SL app that's available for iOS and Android enables a smartphone to be used for remote control and image sharing. GPS technology is also built in for image tagging.