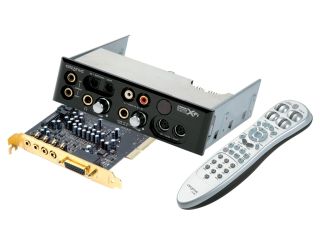 Creative Labs is to allow a third party hardware manufacturers to incorporate Creative X-FI audio chips into its products. Auzentech is to begin producing sound cards driven by the Creative X-Fi chipset.

The new card is currently being alluded to as the Auzen X-Fi Prelude 7.1 - that name could change by the time the product is released - and its audio processor will be produced by Creative. It's a similar set-up to the way Nvidia licenses third party graphics card producers to build on its own core technology.

"When you're playing games, the Auzen X-Fi Prelude sound card will output the best 3D audio and latest EAX effects. And when you're listening to music or watching movies, you'll enjoy an audiophile-quality experience," said an Auzentech spokesperson.

It's impossible to say whether the new cards will exceed the quality of Creative's own X-Fi and Audigy cards, although it seems very unlikely. It's just another way that Creative plans to squeeze more money out of its soundcard enterprise, after other parts of its business have turned out to be unprofitable in recent years.

It also means that Creative could start providing chips to motherboard manufacturers for use on integrated sound boards, which would create a massive improvement in sound quality for low-end systems.