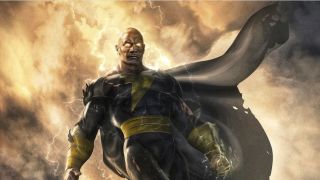 The long-gestating Black Adam movie starring Dwayne 'The Rock' Johnson finally has a release date: December 21, 2021. Johnson has been discussing his role in this tentative DC Comics adaptation for over five years, so this finally seems to represent some real progress. He made the announcement on his Instagram account.

Johnson explains how he was too "rebellious" to play a character like Superman, and why he feels Black Adam is a better fit. "Now, years later as a man, with the same DNA I had as a kid – my superhero dreams have come true. I'm honored to join the iconic #DCUniverse and it’s a true pleasure to become, BLACK ADAM."

"BLACK ADAM is blessed by magic with the powers equal to SUPERMAN, but the difference is he doesn’t toe the mark or walk the line. He's a rebellious, one of a kind superhero, who'll always do what's right for the people – but he does it his way.
Truth and justice – the BLACK ADAM way."

"This role is unlike any other I’ve ever played in my career and I’m grateful to the bone we’ll all go on this journey together." It's true that Black Adam is not a typical DC hero – most people would call him a villain, albeit a nuanced one, and he's the opposite to the DC version of Captain Marvel (last year's Shazam! movie was about this character).

In the comics, Black Adam is the ruler of the fictional nation of Kahndaq. In the last two decades, the character has undergone something of a reinvention, with prominent comics writers Geoff Johns morphing him into less of a villain and more into a complicated ruler with his own moral compass.

It feels like it's The Rock's interest in Black Adam that made this movie happen. After the success of The Joker, you can see why Warner Bros wants to make more movies about villains, but there are at least ten more famous than this character. Nevertheless, you can't argue with The Rock's enthusiasm and star power.

Black Adam's director is Jaume Collet-Serra, who made horror movie The Shallows. This is the third DC movie currently scheduled for 2021. The others are Matt Reeves' The Batman (June 25), and The Suicide Squad (August 6) from Guardians of the Galaxy director James Gunn.

After a rocky couple of years that culminated with the dreadful Justice League picture, the DC Comics movies are on something of a run of form, between Shazam!, Aquaman and The Joker.