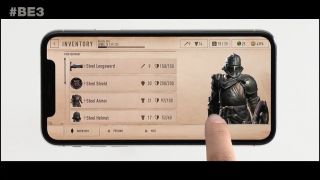 Three years after the successful release of Fallout Shelter, Bethesda has now decided it will bring Elder Scrolls to mobile.

Elder Scrolls Blades will bring a massive first person RPG experience "with console quality graphics" to mobile. Just like in the fully-fledged Elder Scrolls games you can create your own character, level up, pick new abilities, and improve them. You'll be able to explore open outdoor worlds as well as a mix of hand-crafted and procedurally generated dungeons.

The game will apparently have three modes: Abyss, a rogue-like where you must see how far you can get in an endless dungeon; the Arena, where you go head to head in battle against other players; and the game's main mode, and most Fallout Shelter-like mode, The Town.

This final mode will be where players will find a hub of stories and quests which follow their story as a member of the Blades, the top agents of the Empire. When the Blades return home after exile they find their home destroyed and they must rebuild it. This is essentially town building gameplay where players will be able to upgrade and rebuild their town, unlocking new NPCs and quests as they go.

There will, however, also be combat which will work entirely on the mobile touch screen. Players will be able to swipe and move their device to control their moves which will include melee and magic.

Bethesda confirmed it'll be possible for players to visit the towns of their friends. Which should be pretty easy given the publisher also revealed that the game will be coming to as many platforms as possible, entirely for free. Not only will it release on mobile, Elder Scrolls: Blades will come to PC and consoles, as well as both mobile and high-end VR with cross play.

The game will launch in mid- to late-2018 and fans can can pre-order it already on the Apple app store and Google Play Store.