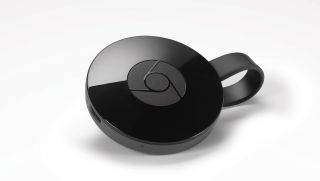 The new Chromecast is a potentially dominant player in the streaming video landscape. Like the first streaming stick, it looks versatile, lightning quick and cheap, coming in at $35/£30.

We expected the 2015 Chromecast iteration to be as accessible as its predecessor, and an inconspicuous addition to our home entertainment setup that doesn't require any additional hardware or lengthy installation process. We were right about most of it, though "inconspicuous" might not be the best way to describe the new Chromecast's color variations of coral and lemonade.

Google announced at its September event that the new Chromecast will come with an updated iOS and Android app that promises to be more transparent and usable, offering an easy way to see which apps you already have that work with Chromecast and a TV guide-style interface that shows you some popular options. Oh, and to even the score with the new Apple TV, it will come with universal search that combs sources like Netflix, Amazon, Hulu, Crackle, YouTube and more every time you search for a movie or show.

But, and this is the most important part, it's already available to purchase.

It's available right now on the Google Store

How much does it cost?

Admittedly, however, the new Chromecast has big shoes to fill. When the original launched in 2013 it snuck on the scene with little fanfare and little warning. It packed a smaller processor than the competition which, at the time, only consisted of the streaming boxes like the recently launched Roku 3 and Apple TV. That didn't deter Google from selling the streaming stick hand over fist come holiday shopping season.

It turns out people didn't mind that the stick itself wasn't the most powerful piece of kit on the planet. Its Android-integrated platform and later openness to working with iOS made it near irresistible to anyone looking to stream content from their phone to their television without messing around with conversion cables. And even though it had no user interface to call its own, setup was a snap and finding content, thanks to the Chromecast app, couldn't be easier.

It went on to inspire the Amazon Fire TV Stick and Roku Streaming Stick from veteran set-top designers, and became the #1 streaming device in 2014, before announcing its successor at an event in San Francisco on September 29. Read on for the big new changes coming to the Chromecast with the most pertinent information highlighted in bold.

While the interior didn't get as big of a touch-up as we expected, the new Chromecast app looks like it will completely revolutionize the hardware.

The last generation of smartphone app really only had two purposes: setting up Chromecast and finding new apps to install. Once you settled in to using Chromecast, the app started to lose its practicality. The new Chromecast app has some new bells and whistles to make sure that it stays installed and used on a regular basis.

The most important feature is the universal search function that allows you to either type in or say the name of a movie and TV show and Chromecast will pull up a list of every source for that content. Say you want to watch American Beauty. When you type it into the search field the app will return every possible source for that video. It might be available on Google Play TV and Movies for $2.99, but it might be on Netflix or Amazon, too. If you're a paying subscriber to these different services it usually makes more sense to choose content from a service you already pay for than shell out for it on a service that you don't.

One of the other big additions is called "fast play." Fast play is a sort of prediction algorithm that determines what you might watch next based on your previous choices and starts to pre-buffer the video before you start it. The example Google gave on stage is that by watching an episode of Archer, the next time you return to Netflix you're most likely to watch a second episode of the series. As soon as you start the Chromecast app, it will start to buffer that next episode so it can start as soon as you touch it instead of waiting the 15-20 seconds for it to start up. It's a great example of Google using its background in software to solve a hardware problem.

Chromecast 2 features: What we can expect

The new Chromecast is exactly what we expected. It sticks to the four tenets listed above (versatile, lightning quick, accessible and cheap) and it's ultra-fast thanks to a new dual-channel 2.4/5Ghz WiFi antenna that supports 802.11ac instead of 802.11n, the standard two years ago.

It takes versatility to a new level by ditching the standard rigid stick form factor for a small plastic circle attached to an HDMI cable. This should alleviate some of the headache of attaching it to TVs with tough to reach HDMI ports while still keeping the Chromecast hidden out of sight.

You'll still need to connect it to a power source, however. But whether that's through the USB port on the back of your TV or via the attached wall plug is your choice.

What's almost definitely on the table, though, are dozens of new apps that are coming later this fall. Some of these will likely come from Google itself, but we're told to expect Chromecast-compatible aps from the NHL and NBA, and further integration of the Remote Display API that allows developers to use a Chromecast-equipped TV as a second screen for games.

There's still a fair amount of uncharted territory out there in terms of games, movie streaming apps and developers who have yet to optimize their apps for Google's pint-sized streamer, and now that the successor has arrived you can expect a resurgence of apps in the coming months.

Google, unlike some companies we know *cough* Apple *cough* don't belabor a product launch. The new Chromecast went on sale the day it was announced at the most reasonable price possible - the same price, in fact, as the current-generation model.

The black, coral and lemonade versions of the new Chromecast launched on September 29 for $35/£28, the same price as the all-new Chromecast Audio.