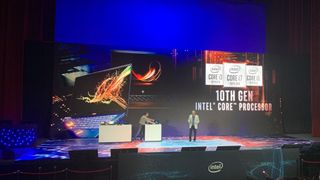 Back at Computex 2019, Intel gave us our first real look at Ice Lake. A platform designed for the next generation of mobile computing, it would use AI to boost productivity. And, finally Intel has detailed exactly what to expect from Ice Lake.

Now, these processors are mobile chips, so you won't be able to buy them and slot them into your desktop – Ice Lake isn't Intel's answer to AMD Ryzen 3000, that will likely come with Comet Lake. Instead, these processors serve as the first step in Intel's future-looking Project Athena.

Now, these 10th-generation mobile processors will come in U- and Y-series flavors, which for the uninitiated are for Ultrabooks and fanless laptops, respectively, and will, of course, feature the latest connectivity options. That means Wi-Fi 6 (formerly known as 802.11ax) and Thunderbolt 3 will be supported natively – the latter with up to four USB-C ports.

What may be more important, however, is the inclusion of Intel Gen11 graphics. These still won't likely make for the best gaming laptops by themselves, but should feature more than enough power to get through a round of Fortnite on your lunch break – something we definitely aim to test when laptops bearing Ice Lake processors make it to market.

We went ahead and listed all of the new processors down below, along with the specs you can expect from each of them. One thing to note is that many of these processors come with Intel Iris Plus graphics, which was previously reserved for more premium SKUs.

One thing we have to note is that Intel is measuring its graphics cores as "EUs", or Execution Cores. In the Intel Core i7-1068G7 – the most powerful Ice Lake processor  – you'll be getting 64 Execution Units. These are functionally similar to Nvidia's CUDA cores, or AMD's Stream Processors, in that the more you have the faster the GPU will be able to handle complex graphics workloads.

Obviously, graphics cards have thousands of these streaming processors these days, but those also cost a significant amount of cash, and you can't exactly slot one into an Ultrabook.

We don't have a full list of laptops packing Ice Lake processors yet, but we're sure we can expect some impressive graphics performance out of this generation – at least compared to other integrated graphics solutions. Perhaps we can expect Intel's Xe graphics cards to follow in Gen11's footsteps.

You'll notice in the above spec lists that this is the first time Intel's Y Series of fanless processors has gone quad-core. Sure, it's on i5 processors and above, but don't you wish the 2019 MacBook Air came out just a little later now?