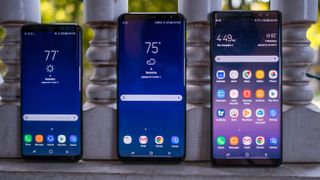 The long rumored foldable, flexible Samsung Galaxy X may not be arriving as soon as hoped, as a new leak suggests the leaked model number for the handset actually belongs to a different phone.

Samsung has now issued a press release on a handset with the model number SM-G888N0, and it appears to be a rugged device and not a futuristic mobile that can be bent or folded.

The Samsung SM-G888N0 is a LTE device built for professionals, which means it's unlikely to ever see the light of day in the consumer market.

It means previous leaks linking the SM-G888N0 model number to the Galaxy X can now be dismissed from the narrative of the rumored smartphone.

Where does that leave the X?

All hope is not lost for the Samsung Galaxy X though, as there are still plenty of rumors circulating around the next generation handset which leads us to believe that it's still on the cards.

This latest development does however mean it may not be as close to launch as previously thought.

With CES 2018 just weeks away, followed by MWC 2018 at the end of February, there's still a chance Samsung could surprise us in the coming months, but it's likely to be later in 2018 now.