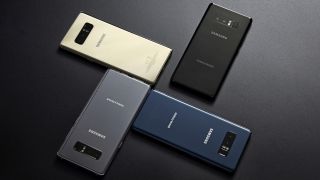 Update: Deepsea Blue is finally coming to the US on November 16. Scroll down to see where you'll be able to snag the new color.

The design is remarkably similar to the Galaxy S8 and Galaxy S8 Plus, but that doesn't necessarily mean you'll have the same color options for your new phone.

Samsung has confirmed some color choices for the release of the Galaxy Note 8 and below you'll find all of the shades you'll be able to buy.

Not all colors are available in all markets at launch, but all may be subject to change and Samsung may decide to launch further colors in your home market at a later date.

The first color for the Samsung Galaxy Note 8 is Midnight Black, which we saw available on the Galaxy S8 and Galaxy S8 Plus. It's the darkest shade for the Galaxy Note 8 and will suit you well if you're looking for a pitch-black version of your new phone.

Will I be able to buy it? Those in the UK, US and Australia will be able to buy Midnight Black, while it's also expected to be available in some other markets too.

The lightest, but not the boldest, shade for the Galaxy Note 8 is the Orchid Gray color option. If you're looking for a gleaming version of the phone you'll be able to get this option.

Maple Gold is making a return for the Galaxy Note 8, making it one of the bolder color choices for the new phablet. If you're looking for a glamorous design for your Note 8, this may be the one for you.

Will I be able to buy it? This one isn't available in the US at launch, but it is in the UK and Australia. Other market availability for the Maple Gold version is also unclear right now.

Coral Blue won't make an appearance as a color for the Galaxy Note 8 as instead there's Deep Sea Blue. It's a darker blue than we are used to on Samsung products.

Will I be able to buy it? Yes, starting November 16 in the US, exclusively at Best Buy and on Samsung's website. It may eventually launch in the UK or AU still, so we'll be sure to update this feature if we hear of a release.

Samsung is prone to including new colors for its phones after release so we may get to see the Galaxy Note 8 in other shades in the future. If so, we'll be sure to keep this piece updated with the latest color options.