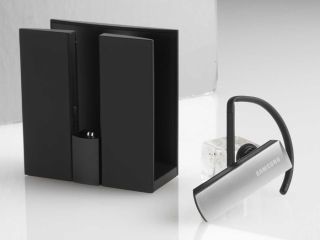 Samsung is rapidly developing a reputation for producing some of the most innovative and quality electronics products in Asia and its newest Bluetooth headset keeps the hot streak going nicely.

Designed by Bang & Olufsen , the WEP 420 Bluetooth headset for mobile phones features some intriguing audio-enhancement technology as well as looking considerably more palatable than similar products from other firms.

On show this week at CeBIT and available later this month in Europe and Asia for around £50, the WEP 420 is less flashy than other headsets, which it achieves by having the control buttons hidden behind a sliding cover. That cover also doubles as an anti-static shield that improves the quality of audio during calls.

As if a good-looking Bluetooth headset weren't sufficiently groundbreaking, Samsung has gone a step further and attempted to craft the charger cradle into an objet d'art. It reckons the cradle will do double duty as "an interior decoration item" but we're going to give that side of the equation the thumbs down.