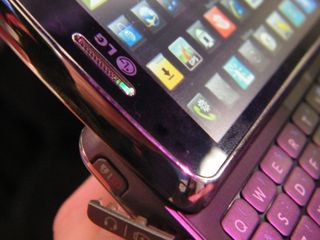 Is this the travelling businessman's dream?

Pico projector technology has been around for a number of years now but it hasn't exactly set the world on fire, mainly due to the quality of the images projected.

Stick the tech into an everyday gadget, though, and then people start to take notice. Enter the LG eXpo – a phone which allows you to project images and movies with the touch of a button.

For LG to call the eXpo a projector phone is a little cheeky, however, as to make it into a projector you need to clip on a small projection unit add-on. It's a chunky piece of kit, and one which hampers the actually use of the phone.

You do forgive it, though, when the projection unit is switched on. Blasting out a 14-inch screen from very little throw space it's impressive to look at and there are definite benefits of having the tech in your mobile.

While it's being pitched at the everyday user who wants to show off the latest movie trailers and pictures, business folks would also want the eXpo for those impromptu meetings and a long throw projector isn't to hand.

As for the phone itself, it's a pretty powerful piece of kit. Boasting a 1GHz Snapdragon processor and using Windows Mobile 6.5, it's speedy.

There's Smart Sensor fingerprint recognition inside which negates the need for passwords and there's all the functionality of WinMo at hand – including email, calendar and Microsoft Office Mobile.

The handset we used was loaded with apps, and there was no real lag changing from one to another. There's some impressive functionality too, with turbo-scrolling to get through your emails faster and a nifty precision control for the cursor when writing out texts, something that is more than welcomed on a touchscreen.

The screen itself is 3.2-inch WVGA display. It's bright, making use of 16M colour, but as it is resistive it still lacks the gliding sparkle of a capacitive screen.

Luckily there's also a full, and real, QWERTY keyboard on hand for you to type out texts and the like. Situated under the screen, you just flip it out and away you go. Other features include 16GB memory, via microSD, and a 5MP camera.

The LG eXpo doesn't feel like a projector phone but a projector and a phone. With the projection unit clipped on it's fairly ugly and far too chunky for your pocket. Without it though, it's a decent phone which more than holds it own against other smartphones in the same price bracket.

It's great that LG has taken the plunge and added pico technology to one of its handsets, but it feels very much like a first-gen device which will be superseded as soon as LG figures out how to get the technology actually in the phone and not as an additional add-on.