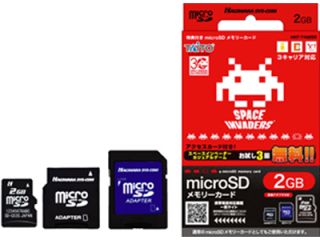 It's a nice little earner for Taito

The last product-planning meeting at Japanese peripheral maker Hagiwara probably went something like this: "People like phones, people like ancient video games, phones like memory cards – let’s bung ‘em all together and make a fast buck."

The result is a special-edition microSD card that comes with free access to a version of Space Invaders tailored for Java-equipped mobile phones, which is a Very Nice Idea in our book.

Only problem is, licence-holder Taito requires purchasers of the card (1GB or 2GB versions are available for around £10 and £15, respectively) to connect to their company site and pay data charges to their phone provider for the privilege.

It’s a nice little earner for Taito, which gets a slice of the data pie from the networks, and for Hagiwara, which can cash in on a little Space Invaders nostalgia, but why couldn’t they just have stuck an installer for the game on the card?

Oh, and after three plays, the mugs who actually bothered then have to pay to play more. We’ll pass, thanks.