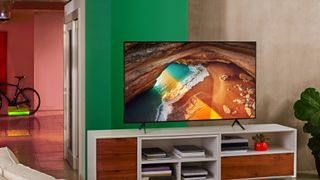 OLED vs QLED? Organic or Quantum? It's easy to get confused with the technical vocabulary, but don't be fooled: the OLED vs QLED rivalry is shaping up to be the central question for premium TV buyers today – despite both OLED and QLED having surprised the TV market by their arrival.

Technically the successor to the plasma TV, OLED displays has rapidly grown in prominence in recent years, thanks to support from the likes of LG, Panasonic, Sony, and Hisense – and some truly excellent picks warranting their own best OLED TVs guide.

QLED TV, on the other hand, came out of nowhere in 2017 – technically as a rebrand of Samsung's SUHD television range – but now make up a huge proportion of Samsung TVs.

But is QLED tech the very peak of current TV technology, as many people would claim, or does it just get more of an advertising push? Is the rival OLED technology – supported by almost all other TV brands – actually the real deal?

If you hate acronyms and don't know how to start choosing between them, this is what you need to know about both QLED and OLED TV technologies – what they are, how they differ, and which brands support them.

The battle between QLED and OLED is best summarised in one sentence: QLED is a mis-termed tweak of existing LCD technology, while OLED is a completely different technology.

The key phrase here is 'self-emissive'. OLED – which stands for Organic Light Emitting Diode – uses a carbon-based film between two conductors that emits its own light when an electric current is passed through.

Since the pixels themselves are producing the light, when they need to be black they get switched off completely. That means no chunky LCD backlight, remarkably realistic blacks, so-called 'infinite' contrast, lightning-quick refresh rates and a muted brightness ideal for movies – if dim by LED standards. Watching an OLED TV for the first time will give you that rare feeling of having just witnessed something really very special.

OLED has been stuck at only a few TV sizes for the past few years – given the smaller scale of its manufacturing compared to LED – though LG has now expanded to a 88-inch LG 8K OLED and is planning to develop 48-inch panels to give viewers a wider choice of OLED sizes.

QLED isn't a new TV technology as much as it is a rebrand. Until last year Samsung called its flagship TVs SUHD, but that didn't fly, so it's now called them QLED. Yes, it sounds very, very similar to OLED, which suggests either a decision to muddy the minds of the TV buying public, or an inferiority complex. Or both. In fact, QLED – which stands for Quantum-dot Light Emitting Diode – is very different to OLED.

The weirdest thing is that QLED TVs are not QLED TVs. A QLED TV should be just like an OLED TV in having a panel that's self-emissive, so that it can switch individual pixels on and off. Samsung's QLED TVs can't do that, and in fact just put a quantum dot colour filter in front of an LCD backlight. It's premature to call them QLED, and they should really be called QLCD-LEDs. Thankfully, not even the acronym-riddled TV industry could live with that.

The inorganic quantum dot light-emitting diodes in a QLED panel do not emit their own light, but instead are illuminated by a backlight, just like any LCD TV. That's why they're not as thin as OLED TVs.

So, really, it's not a next-gen display technology at all, just a tweak to LCD TV tech. However, that doesn't mean it's not impressive – it really is very good.

Most TV brands are lining-up behind OLED, believing it to be the superior technology for picture quality. It's hard to disagree, but despite LG, Sony, Panasonic, TP-Vision (under the Philips brand in the UK), Loewe, Bang & Olufsen, Skyworth, and ChangHong all now selling OLED TVs, they do tend to be very expensive. The maker LG Display just can't produce enough OLED panels fast enough to bring them in at a lower cost, which is making OLED TVs seem like a top-tier premium TV technology only.

Samsung abandoned its efforts to make OLED TVs in 2014 due to low production yields, and only started talking about QLED again back in 2017. It's now trying to popularize the technology by getting other companies involved.

Though the brands behind QLED are fewer, they're quickly getting unionised. Samsung, Hisense and TCL banded together under the QLED Alliance back in 2017, in order to advance QLED development – and shift more QLED sets in the world's biggest TV market, China.

Should I buy a QLED TV or an OLED TV?

If you're after a high-end 55-inch TV, buy an OLED TV, since both technologies are the same price at that size. However, if you have something else on your mind – a smaller screen size and/or smaller budget to play with – it's more complicated that that.

Since LG Displays makes all OLEDs and Samsung all QLEDs, you might think that it's possible to draw grand conclusions about which tech is better with – for example – games, and which is better with movies. That's not the case. As with all consumer electronics products, it depends on (a) how much you spend, and (b) which brand you opt for.

Samsung's flagship QLED is the Samsung Q900R 8K QLED TV, while the LG E8 OLED best extol's OLED's virtues. Check out our reviews of these two sets if you want to see the best both technologies have to offer.

The future for OLED & 'true' QLED

If you are after the very best in picture quality, the advice is simple; buy an OLED TV. However, it's a close run thing, and besides, that situation may not last for long because so-called QLED TVs may soon ditch the LCD backlight to actually become QLED technology proper... and therefore catch-up with OLED. Cue 'true' QLED.

"True QLED sets are self-emissive, as with OLED sets, and are not yet in the market, but are anticipated to be so in the coming years," says David Tett, Market Analyst at Futuresource Consulting. "When it is released it is expected to provide the strongest challenge to OLED yet, as it brings many of the same benefits as OLED, with few potential drawbacks."

So-called 'true' QLED TVs that are self-emitting were rumored to be incoming from Samsung in 2020, if not later. As well as being self-emissive – so as capable as OLED TVs at switching pixels on and off individually – 'true' QLED TVs should retain their brightness advantage. Samsung could even compete with a OLED-QLED hybrid, if recent reports are anything to go by.

If the future is bright for QLED, those behind OLED panels are hoping that one of the technology's native characteristics, flexibility, wins the day. "OLED sets can offer new audio solutions that see the panel vibrate to create sound and could also offer new form factors, both due to their flexible nature of the panel," says Tett. This is nowhere clearer than with LG's incoming rollable OLED, the LG Signature Series OLED R,  which is able to curl up into the television's base.

For now it's OLED that takes the crown for the best – and most expensive – TV tech around, but unless LG Display can massively increase its production rate and create more screen sizes, the immediate future of the mainstream TV could still belong to QLED.