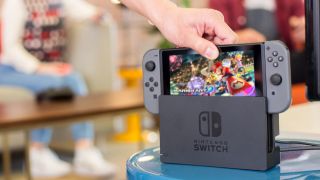 After last week’s surprise Direct, we weren’t expecting any big Nintendo Switch announcements for a while. However, 2018 appears to be the year Nintendo is aiming to defy expectations. Somewhat out of the blue the company has announced that it will reveal a “new interactive experience” for the Nintendo Switch at 10pm GMT on January 17.

Details on what this experience will actually involve are non-existent right now but according to Nintendo it’s been “specially crafted for kids and those who are kids at heart.”

Making moves to draw in a young and fresh audience is an unsurprising move from Nintendo. Just recently Nintendo's president Tatsumi Kimishima said that the console’s second year would be “crucial” in determining its longevity. A big part of the company’s second years plans, he revealed, involved expanding the console’s playerbase “beyond traditional gamers" and include those “who barely touch game consoles”.

This reveal certainly seems like it could be a big part of those plans. Promises of “a new interactive experience” suggests this will be more than a software announcement, and many are wondering if the console could be about to receive a new accessory.

A virtual reality headset was our immediate thought, and we know it’s something that Nintendo has been looking into given past patent applications. However, recent comments from the Nintendo France General Manager Philippe Lavoué suggest that Nintendo is no longer actively interested in the technology.

“If you look at VR headsets, I doubt they can appeal to the mainstream,” Lavoué said in an interview with Les Numeriques. “Consumers are not patient with entertainment if you’re not able to deliver an all-inclusive package.”

Given the doubt around VR, we're also wondering whether we could finally see one of Nintendo's mobile offerings link up with its new console.

The recent release of Animal Crossing: Pocket Camp left many wondering whether the beloved franchise would eventually make its debut on the Switch and this could be a good opportunity for Nintendo to bring mobile and console closer together.

One of Animal Crossing's designers, Aya Kyogoku, drew attention to the upcoming announcement on Twitter which adds weight to our suspicions that the experience will be related to Animal Crossing in some way.

As torturous as the wait will be, it’s not long until Nintendo reveals all at 10pm GMT/ 2pm PT. Keep an eye on TechRadar where we’ll be reporting all the information as it’s announced.