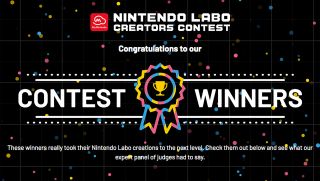 Nintendo has announced the winners of its Labo Creator Contest. Intrepid cardboard wranglers have turned the Switch into a “solar-powered” accordion and an alarm clock.

Momonga906’s entry is the Labo accordion. It uses holes punched into a “kleenex box”. A light sensor underneath detects which hole is being blocked, to determine the right note.

The L controller then detects when you’re tilting the other side of the accordion, altering the note’s volume. It’s pretty clever.

Labo Tea Time by JoeProgram is even more ambitious. It uses Joy-Con remotes attached to four cardboard tea pots, which become controllers in a tea-serving game.

You lift the pot’s lid to fill up that tea flavour, then tip it to serve customers, indicated on the Switch’s screen. Just like a food-flinging casual game, if you don’t serve the customers in time, they get fed up and you lose a point.

It’s a great example of how much smart and creative Switch fans can squeeze out of Nintendo Labo.

iRamos99’s Analog Clock with Alarm finds a whole new use for your Switch, turning it into an analogue clock whose time is set using a series of cardboard control knobs.

Nintendo kicked off the Labo Creator Contest in April 2018. You can check out all the winning entries at the Labo website.

Want to get involved?

Seeing the sprawling visual code of these projects frankly makes us a little scared. But if you think you have the chops to compete, the next waves of Labo Creator Contest rounds start soon.

From 19 July to 20 August you can submit your own “Best Toy-Con Musical Instrument” and “Best Gaming Experience using Toy-Con Garage” designs.