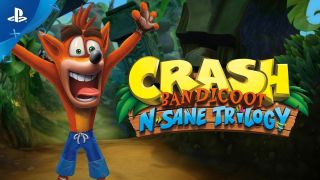 Naughty Dog created the original Crash Bandicoot back in 1996, but the upcoming remaster is being handled by Vicarious Visions, the Activision studio behind several recent Skylanders titles.

Anyone worried about whether the team can be trusted with the beloved franchise can rest slightly easier with the news that the Naughty Dog team has already had a chance to try out the upcoming game.

Speaking to TechRadar ahead of the British Video Game BAFTAs, Naughty Dog’s Arne Meyer said, “The Activision folks have been great enough to bring a couple of builds by the studio so we’ve been able to check it out already. I think for a lot of the team members that have been there for the duration, they’re really excited to revisit Crash.”

When asked whether it was strange to see a franchise that the studio created being worked on by another developer Meyer said, “Not so much, especially for Crash. Crash has been around for a very long time. It’s gone through multiple studios.”

“They are always near and dear to our hearts, so it’s always really great to see what other people are doing with them. I think for us we’re really excited to see it come back and be able to play it on the PS4.”

Crash Bandicoot isn’t the only classic Naughty Dog franchise to be making a comeback this year. Its PS2-era platformer, the Jak & Daxter series, are being given the HD remaster treatment later this year when they will be released on PS4.