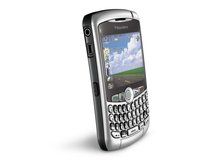 New Pluto / 9900 handset will be based on older stylings

Research in Motion has decided that to just have one touchscreen handset isn't enough these days, and will release another one - although this one will have a QWERTY keyboard too.

Users will now be treated to a physical set of keys as well as being able to prod the display as well, as RIM covers all the touchscreen styles in its handset line-up.

The BlackBerry 9900, codenamed Pluto according to BGR, will be a similar size and style to the Curve 8900 handset that has proved pretty popular.

The idea is to keep developing touchscreen tech into its handsets for the foreseeable future, at least the high end ones, and the Pluto helps fill the gap occupied by those who love tech but are addicted to a physical QWERTY keyboard.

You'll be waiting for a while on this one though: released later in 2009, possibly as late as around Christmas. Might as well get a Bold and Storm in the meantime and stick them together.