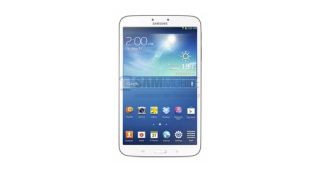 The Samsung Galaxy Tab 8-inch hasn't been the best kept secret, and now we're able to glance on what appears to be a leak of the forthcoming slate.

The leaked photo and specs surfaced over on SamMobile, outlining that the tablet will come in 3G and Wi-Fi-only versions, ready to line up alongside the already announced Galaxy Tab 3 7.0.

If these are to be believed, we can expect the 8-inch screen to come hosting a resolution of 1280 x 800 pixels, with a 6.95mm bezel that makes it thinner than previous Samsung tablets.

Welcome to the family

There'll be a 5-megapixel snapper on the back, and a 1.3-megapixel one on the front. It's also stated that the tablet will be running on Android 4.2.2 Jelly Bean.

Doing all the hard work, meanwhile, will reportedly be a 1.5GHz dual-core processor with 1.5GB of RAM, as well as a 4,550 mAh battery.

SamMobile also claims that we can expect to see the tablet by the end of the next month, which coincides with that we've previously heard. That said, we'd still take all this as rumour for now.