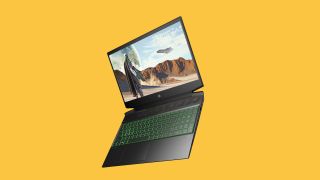 HP is refreshing its lineup of gaming hardware with new Pavilion gaming laptop and desktop models. The refresh was announced at Gamescom 2019, and includes not only the hardware but also a series of new gaming monitors and peripherals.

The desktop will receive an earlier launch, expected in August, while the laptop is expected to be available in September.

The HP Pavilion Gaming 15 laptop is taking a bet on AMD, as it will use AMD's CPUs for the first time in an HP gaming laptop. It can include up to a Ryzen 7 processor. On the graphics side, it will stick with Nvidia, and run up to a GeForce GTX 1660Ti Max-Q. That should be enough to power the 15.6-inch, Full HD display, which is available with either 60Hz or 144Hz refresh rates.

The new Pavilion Gaming Desktop can go even harder. It will feature up to 9th-Gen Intel Core i7 processors or the new Ryzen 3000-series processors, both with 8-core options. On the graphics side, it can include up to Nvidia GeForce RTX 2070 graphics cards or the new RTX 2060 Super graphics cards. It also has plenty of room for upgrades, with support for up to 32GB of DDR4 memory, room for three internal storage drives, and upgradable networking options.

HP's Omen X 27 gaming monitor can pair with either of the new computers to upgrade the gaming experience in September. It offers some serious premiums that help justify its $649 (£579.99, around AU$1,000) price. It has a Quad HD panel capable of running at a blistering 240Hz and 1ms response time. That means it can offer super smooth and sharp gaming all at once.

The monitor also supports AMD's FreeSync 2 HDR, which can help eliminate screen tearing and enhance game visuals. The new Omen X 27 monitor does all that while offering thin bezels on three sides, built-in bias lighting, and a height-adjustable stand.