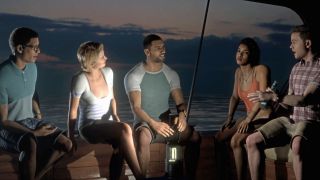 Multiplayer modes have become a prerequisite for many game developers. In an increasingly saturated market, co-op and online components can boost a title’s longevity and retain gamers’ interest long after release.

Supermassive Games’ Man of Medan, the first entry in the studio’s ambitious Dark Pictures Anthology series, isn't any different in that respect. The inspiration behind the British studio’s decision to introduce multiplayer to Man of Medan and its fellow anthology games, however, is.

“It rose out of how we saw people playing Until Dawn,” creative director Tom Heaton tells TechRadar. “People played it in a highly social way, and we saw people on Twitch and Youtube playing it together, talking about it – what they’d do in specific situations – and arguing about choices that had to be made.”

Developed as a single-player game, Until Dawn’s social gaming success took Supermassive by surprise. The survival horror title became an online hit as interactive watch parties - where the audiences of YouTubers and Twitch streamers voted on what decisions should be made - became increasingly common in the weeks after its release.

Pass-the-controller type gatherings also emerged and added a pseudo-competitive edge to the game that Supermassive hadn’t envisaged. These couch co-op affairs saw people control one character each, make their choices without input from their friends or family, and live or die by those actions.

With Until Dawn proving that there was an untapped market for interactive horror titles, especially from a social perspective, multiplayer became a key cornerstone of Man of Medan’s development from the get go.

“Multiplayer has always been part of the design of The Dark Pictures, and Man of Medan, so it’s been there right from the start,” Heaton explains. “We realized – and what we developed – was a very social experience, so multiplayer was a development of that. It was ‘how can we expand this social experience?’ and we came up with two ways.”

Shared Story and Movie Night, Man of Medan’s multiplayer modes, offer different gameplay experiences. Movie Night is a carbon copy of the pass-the-controller parties that Until Dawn spawned, and allows up to five players - Man of Medan’s cast acts as the limit on this - to play through the story together.

“We wanted to do what players were always doing in getting together on the sofa, playing co-op and each taking control of one character and kind of making a party out of it,” Heaton reveals. “That’s Movie Night mode, and it’s an enhancement of that where you can put in your player name and assign players. The game will prompt you when to change controller and it’ll give out awards for how well everyone is doing.”

If Movie Night contains the hallmarks of offline co-op, Shared Story is your typical online co-op option. Shared Story sees you and a friend control separate characters, either in the same or different scenarios, that occur simultaneously. Allowing two players to impact the story with their choices, particularly with Man of Medan’s branching narrative being much bigger than Until Dawn’s, initially posed problems for Supermassive and forced them to rework their developmental process.

“We weren’t even sure if it was possible actually,” Heaton reveals. “We put a small team on building a prototype of a two player game – in the style we make – and it simply meant you could wander around a room and then have a conversation between the two of you. But, even that tiny experience, was so compelling – even sceptical people were playing and going ‘okay, I get this’ – that we decided to go for it and that’s when we decided to make it a key part of The Dark Pictures Anthology.”

Introducing two new modes might have some gamers fearing, like other multiplayer titles, that Man of Medan’s achievements and trophies are divided up to force them to play every game type. As Heaton explains, though, every award and unlockable piece of content will be obtainable no matter which mode you choose.

“We think the replayability is very big and it’s the most branching game that we’ve ever done,” Heaton says. “It’s up to players which mode they want to play in. Some people are very passionate about single-player, and they can get the whole experience playing on their own.

"Some people will want to play co-op and that’s a perfectly valid way of playing it first time out. Some will want to host a party – also great – so it’s the same core story and characters, but it will be different every time because of the branching. Every time you do something the game branches and you’ll get a different experience.”

As interactive fiction becomes more mainstream, due to the popularity of productions like Black Mirror: Bandersnatch, Supermassive are well placed to lead this genre’s gaming charge. Man of Medan’s combination of intriguing narrative, cinematic feel, and social gaming mechanics is pushing the boundaries about how games are made, and Heaton believes that universal human experiences are behind the growth of this genre.

“We’ve always been about delivering really great quality but also innovation – that’s one of our key words,” Heaton states. “We’re constantly pushing it to see what can be done and seeing how far we can take things.

"We’ve reached a level in the tech where we can get almost cinematic quality – if you’ve got the knowledge about how to do that – so it’s accessible to an audience who are familiar with horror movies or who have watched horror on TV.

"And I think that streaming and social media help. You can talk about it, and these games are dealing with very human emotions and characters that people can relate to, so they can have a conversation about them.”

Until Dawn’s accessibility enabled non-gamers to dabble in, or even become long-time fans of, games. Man of Medan’s multiplayer focus, then, can offer a more obvious gaming entry point to people who are familiar with horror movies or shared experiences.

Supermassive hopes that Man of Medan can be just as influential in introducing more people to games but, above all, simply wants to spark entertaining conversation among groups of people about the good, the bad, and the downright crazy decisions they’ll make in-game.

“We created a fanbase with Until Dawn and we’ve got very passionate fans,” Heaton says. “I hope they enjoy it and really hope it brings new players in. We know from previous games we’ve made that people talk about playing our games with their girlfriend, boyfriend or partner – who they don’t normally play games with – who were able to enjoy this experience because it’s an experience that they are familiar with.

"So we’re incredibly excited that it’s launching soon, and we can’t wait to see people play and talk about it.”