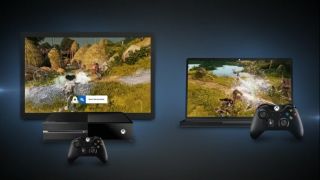 Probably the biggest gaming news to come out of Microsoft's Windows 10 event today was that players will be able to stream any Xbox One game to a Windows 10 PC or tablet.

Microsoft Studios and Xbox head Phil Spencer was on hand to show off the feature using Forza Horizon 2.

"Wouldn't it be great if we could play those games from anywhere in our house, from the couch, out back, in my bedroom?" he asked.

Xbox One-to-Windows streaming lets you play Xbox games on any Windows 10 PC or tablet "in your house,' i.e., on the same Wi-Fi network.

"Today people are playing games on more devices than ever, and with Windows 10 we wanted to focus on those gaming scenarios across device[s]," Spencer said.

The two played co-op multiplayer together, with Belfiore on Windows and Carter on Xbox.

Spencer emphasized that Windows 10 gaming is a big focus for the company going forward. In addition it seems many of Microsoft's universal Windows apps will be compatible with Xbox as well.

Windows 10 will launch later this year.