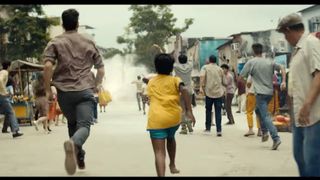 Earlier this week we got a first look at the Pokémon Super Bowl TV spot, which commemorates 20 years of the Pocket Monster franchise.

The Pokémon Company clearly sunk a lot of money and effort into making the minute-long video, which features a group of youngsters inspired to go out and be the very best Pokémon champions they can be.

What you might have missed, however, were the copious references to the Pokémon franchise, some of which were very obscure. Having noticed several YouTube commenters highlighting the hidden easter eggs, we decided to go through and pick out all the ones we could find.

Noticed any we missed? Let us know in the comments below.

First off, a lot of people have already noticed that the kid at the start is probably a reference to Joey (bottom right), the youngster from Pokémon Gold and Silver who would keep calling you to tell you how great his Rattata (and later Raticate) was.

What was less obvious were the red and blue rugs seen off to the right as "Joey" was running down the street - a reference to the original games, Pokémon Red and Blue.

The truck that the boy runs past looks like a nod to the legendary Pokémon Mew, which was rumoured to be hidden under a black truck found near the SS Anne in the original games. The writing on the side of the truck looks very similar to that on the Ancient Mew Pokémon card, which seems to confirm the reference.

We don't actually see the battle that the boy is witnessing, but this glimpse confirms there's a Charizard involve.

Quite a few in this one. First, the reference to the Hidden Machine move Surf on the poster bottom left. There's also a mention of Kanto on the TV - the first Pokémon region we ever explored - as well as news headlines that hark back to Pokémon Red and Blue. One of them reads "Roadblock on Route 12", referring to Snorlax blocking the road in the original games. Another one reads "Crowds flock to see rare fossil discovered at Mount Moon."

There's also a poster on the far left that we're struggling to see clearly. It looks like that might be a Growlithe, but let us know if you have any ideas.

Again, quite a lot here. First up, there's an advert for Moomoo milk (bottom left), a healing drink from Pokémon Gold and Silver. Not far above that is a sign which reads "7F" - the floors of the buildings in Pokémon are often named 1F, 2F and so on.

At the bottom right is a "Game Arcade", probably referring to the Game Corner, while the sign above it shows a Rare Candy - an item which can be used to instantly level up Pokémon.

When we see the girl playing chess, one of the pieces is clearly shaped like a Nidoking But you already knew that, of course.

We then see a football player with the number 20 on his shirt - a reference to 20 years of the franchise - while the backs of two of the players match up to form the year 1996 - the year that Pokémon Red and Blue were first released.

The fire symbol seen on the players' helmets is also the shape of the Volcano badge, obtained in the original games on Cinnabar Island. Also, is it just us or do the players' uniforms look a bit Team Rocket-ish?

Finally, a reference to the TV show theme song...

Did we miss any? Watch the video below and tell us.