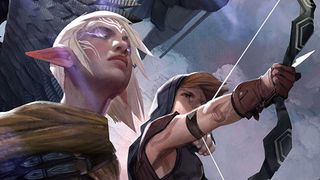 With Anthem disappointing, all eyes are on developer BioWare's return to the Dragon Age universe to see if the veteran RPG maker still has what it takes to craft an engrossing adventure. A new short story collection may be about to tease where we're headed for Dragon Age 4.

Dragon Age: Tevinter Nights is a new set of tales by a handful of BioWare authors, edited by Dragon Age's current lead writer, Patrick Weekes. He took to Twitter to clarify his position as editor of the new collection, and to give a shout out to those involved:

Hey, all: this isn’t accurate. It is NOT a novel by me.It IS an anthology of short stories set in the Dragon Age universe, featuring @eplerjc, @bbattye, @CourtneyWoods, @Sylvf1, @el_cormier, and many others! We cannot wait for you to see them! https://t.co/xLijSP7ngS20 July 2019

Beyond the authors working on the book, there's little to go on so far as to what the collection will contain. However, its title "Tevinter Nights" seems a certain tease as to where the Dragon Age franchise is headed next.

Each Dragon Age game so far has, more or less, focussed on one region or area of the continent of Thedas, in which the games are set. So, Dragon Age Origins introduced Ferelden, Dragon Age 2 focused on the single city of Kirkwall, and Dragon Age: Inquisition spanned the Orlesian Empire.

Regularly referenced is the Tevinter Imperium, an area where magic is less strictly policed than in other realms of Thedas, with its mage population often seen as antagonists in the Dragon Age universe.

The title of the new short story collection adds weight to the rumour that Dragon Age 4 will be set in the Tevinter Imperium. Not only has BioWare previously used books to set up forthcoming locations and characters in its games (Weekes, for instance, wrote a book called "The Masked Empire", which was published prior to the release of Inquisition and introduced ancillary characters and quest lines), but also Dragon Age Inquisition's final DLC scene saw the player character Inquisitor stab a knife into the heart of the Tevinter Imperium on a map.

It's all pointing in one direction then, and towards a location that's long fascinated series fans. BioWare desperately needs a hit after Anthem's failings. Here's hoping Dragon Age has that magic touch of old.