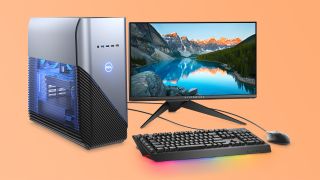 In a bid to get ahead of the rush of E3 news, Dell has announced a brand new version of its Inspiron Gaming Desktop for 2018, this time kitted out with all AMD processing options.

Priced at just $849 (about £639, AU$1,109) when it lands on June 12 in the US, the new Inspiron Gaming Desktop is clearly aimed towards either first-time PC gamers, or those that don’t require the exorbitant bells and whistles of high-end gaming PCs.

Still, that price will get you a 2nd-generation AMD Ryzen processor (up to octa-core) and an AMD Radeon RX graphics as powerful as the RX580 card. While Dell has kept quiet about what exactly that starting price gets you, we know that the system supports up to 32GB of DDR4 memory, a hard drive as large as 2TB as well as a solid-state drive as capacious as 25GB.

Dell also claims to have improved the airflow of the chassis, with subtle blue LED lighting adorning the front of the case. This could allow for users to push the hardware a little more, as they experiment with overclocking to get more performance.

Finally, the chassis features USB-C 3.1 as well as six USB 3.0 ports, an optional optical drive and up to five drive bays for additional storage. These forward-looking changes could give first-time PC gamers an introductory PC to grow with.

New Alienware accessories descend upon us

To give would-be Inspiron Gaming Desktop buyers a taste of its more hardcore Alienware brand, Dell has also announced a new wireless Alienware PC gaming headset, the aptly named Alienware Wireless Gaming Headset. This $229 (about £169, AU$299) set of over-ear headphones with included microphone will be available on June 11 in the US.

What’s particularly interesting about these headphones is that, while they offer 7.1 virtual surround sound and a noise-cancelling mic, they can sync up with the AlienFX lighting settings of your other Alienware devices and accessories. Plus, they can last up to 15 hours on a single charge – or 8.7 hours with the AlienFX RGB lighting activated.

Meanwhile, Alienware’s Elite Gaming Mouse will launch this July 31 in the US for a much more palatable $89 (about £69, AU$119). That price will get you a wired gaming mouse with four configurable weight adjustments, interchangeable side wings with various sets and arrangements of buttons, and on-the-fly DPI switching for ultimate control. That’s quite a bit of versatility from a gaming mouse, hence the price tag.

Given the arrangement and pricing of these announcements, it appears as if Dell is looking to entice new PC gamers into the Alienware world through its Inspiron gaming hardware decked out with Alienware accessories. Could it work? That likely depends a lot upon performance, so keep it locked her for deeper review coverage.