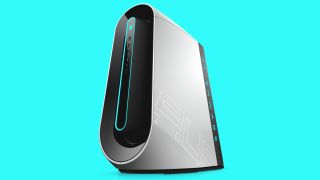 If you’re big fans of those thin and light, space-age designs that the new Alienware gaming laptops are sporting – we can’t blame you, they’re stunners – then you might have a hard time resisting Dell’s latest Alienware Aurora.

As far as the internals, this design overhaul still boasts pretty much the same processor options as its predecessor, the Alienware Aurora R8, with up to 9th Generation Intel Core i9 9900K processors, only with more graphics offerings, including the new AMD Radeon RX 5700 and Radeon RX 5700 XT cards.

To round out your Alienware rigging, Dell is also releasing a slew of Alienware gaming peripherals and displays, including three gaming monitors, two gaming keyboards, and three gaming mice, all featuring the same Legend industrial design and color options.

To give you the complete and immersive gaming experience, the Alienware Low-Profile RGB Mechanical Gaming Keyboard ($159/about £140, AU$240) incorporates the latest generation Cherry MX Low-Profile Red keys and 16.8 million AlienFX per-key RGB lighting, while the Alienware Wired/Wireless Gaming Mouse ($99/about £90, AU$150) is expected to deliver up to 350 hours on a single charge.

Dell G5 Desktop joins in on the fun

Budget gamers who don’t have $900-plus to shell out on a new gaming desktop won’t have to miss out, as Dell also brings to the table its first G-series desktop. Complete with what Dell calls its gamer-inspired design, optional blue LED lighting and optional clear window side panel, the Dell G5 is packed with up i9-9900K chips, as well as up to Nvidia GeForce GTX 2080 and AMD Radeon RX 5700 XT graphics cards.

All that means that budget gamers should expect excellent 1440p gaming performance at a much lower price point than its Alienware cousins. The Dell G5 Desktop will also be available on August 19, with the starting configuration setting you back $629 (about £520, AU$930) only.