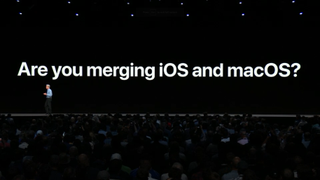 Apple's annual developer conference, WWDC 2018, is all over, with a keynote presentation from Tim Cook and co. We be reported live from the event at the McEnery Convention Center in San Jose, California, and you can read all about what happened below.

12.14 - That was nice. Partly because it was nice to see people being successful, but also because I didn't have to type. Tim is now lauding the developers and thanking those at Apple that made today possible.

That's it.. WE. ARE. DONE. I need the toilet SO SO BADLY. Thanks for sticking around.

12.07 - We're back to Tim... this has been going so so long. No hardware yet, and this looks like there won't be any to see either the way TIm is talking.

He just mentioned Walkie Talkie. I keep forgetting that and getting excited.

Let's get on dates: Developer Betas for all the software will be available from today. Oh, that's it.

We're watching a video on how developers got into coding, from their families. I feel this one is playing for the room, making coding sound cool. (It is, of course).

'We think this question is coming from something else. Mac users have access to great native apps, that take full advantage of the technology. We routinely access web-based experiences like Netflix, or cross-platform games on tech like Metal. All these platforms enrich things.

'But there's one more, and here's a sneak peek on a multi-year project... it's called iOS. There are millions of iOS apps and we think they'd be great on the Mac'.

Sounds like it is coming, Craig. But no, it's about porting them across more easily to help developers. This has meant things like windows resizing, use of the trackpad etc. We're in Phase 1, tested some of the iOS apps (OH, that's how Voice Memos, Home and Stocks are coming) and they were easy to bring across with few code changes.

12.02 - Now it's about machine learning - there's a new tool called CreateML. You'll train vision and natural language models just through dragging in things like test sets, and will instantly enhance.

Apple worked with Memrise, where in the past it would take 24 hours to train a model through images, but the same can be done in 48 minutes with the new tools, and it's even 18 minutes on the iMac Pro, with file sizes far smaller.

You no longer need to be a machine learning experts to build them into your app, according to Craig. I'll take his word for it.

11.59 - There's a lot more coming to the Mac App Store - Microsoft, Adobe and Bare Bones are throwing their wares on there.

Craig is back on stage now, talking about two new kits: Metal is first. Talking about eGPUs and how much they can enhance - with the 13-inch MacBook, you can get over 8x improvement by adding in more EGPus.

11.56 - The Mac App store is being chatted about now. Apple's been thinking about 'what people do on their Macs', and it's resulted in a completely new Mac App store.

It's very tile-y. The Discover app will be on the radar there, with the same top charts in paid and free options.

There are Create, Work, Play and Develop tabs to help you decide which app you'll want to use. I wonder how many people will scout around this - I forget the Mac App Store is there a lot.

11.52 - Safari is getting an update now - with the ability to take the privacy back. Apple is shutting down the ability to share information on social media or commenting.

You'll still be able to use them, but those buttons can't lay cookies to track you. Apple is going big on privacy here. Also any fingerprinting, where you're tracked from site to site, is going to be harder on this in Mojave.

Everything will be simplified, and data companies will find it 'dramatically' harder to track you across the web. This goes pretty deep, and it goes across Mojave and iOS 12.

11.47 - Is it Mojav-EEEE or Mojav-AAAY? Tweet me on @superbeav. I won't be able to look because my fingers are falling off, but I'll get to them later and chortle.

Oh, News is coming to the Mac. And Stocks... seriously, does the inventor of the Stocks app have bad pictures of the Apple leadership team and is blackmailing them?

That means you can set the heating and monitor your video cameras without needing to pick up the phone.

Fine. Let's get back to it. Continuity is next up. If you've got a project that needs a photo, you can see if your phone is nearby. Tap the icon, pick up your phone and it'll instantly show on the Mac and in the project.

The same with document scanning - if the phone is nearby and can do the job, it'll send the picture straight to your computer.

11.45 - Screenshots are getting an update, allowing you do things like magnify instantly, or access other tools. There's a heads up display to give you access, and you can add in video screen shotting too.

Craig's blue shirt looks so much more vibrant on the live stream. It's more pastel in real life. Just in case you were wondering. I can't see his shoes though, probably some standard brogues.

11.44 - You can markup within Finder, so you can sign the document and improve or approve documents with no problem. You can trim audio and video too - and that's all from the Quick Look capability.

11.42 - With Gallery View, you'll get more information. For instant, you'll get more metadata in a photo or documents. With that, you can get quick actions you can instantly use the app within the Finder rather than jumping out.

There's more contextual information - and you can customize them, so inside Finder you'll have buttons. If you've got a PDF and want to watermark it, you can set the actions to do it in one press. Simple stuff, but handy.

11.40 - The desktop will subtly change throughout the day, with the desktop altering its appearance as time passes.

Now we're onto demo time. Desktop Stacks are coming in, where different files are grouped together, automatically. Arranged by kind, date or tag, and a click opens it up. Man, I need this.

11.39 - It's good if you're working in a dark environment, or working on something else. How has this taken so long to get to it?

The developers are loving the fact that Xcode and the inspectors all look better in the new dark mode.

11.38 - Settle in, I think this could get deep. There's dark mode for Mojave, allowing you to get a darker mode on your Mac.

11.37 - This year, we're getting 'striking changes'. Still in California, it's going to be called...MacOS Mojave.

Behind me: 'We're going to the desert, bitcheeeeeees!'.