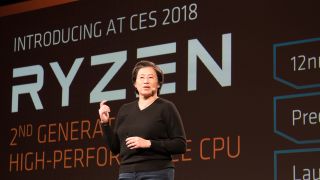 Intel used to be the de facto king of the CPU world, designing the best processors out there – hands down. However, with AMD Ryzen, everything changed. These days, AMD is dominating the market with not just AMD Ryzen 2nd Generation and Threadripper 2nd Generation, but also its recently released Ryzen 3rd Generation. In fact, AMD has more than doubled Intel’s sales, according to a German retailer.

As far as this generation goes, however, we’ve been able to put a wide range of Ryzen 2nd Generation processors to the test, from the Ryzen 5 2600X to the powerhouse Ryzen 7 2700X, we know AMD isn’t pulling any punches when it comes to power and value.

There were rumors of a Ryzen 7 2800X, which might have given the recent Coffee Lake Refresh processors a run for their money – but, with the advent of AMD Ryzen 3rd Generation, announced at Computex 2019 and released July 7th, 2019, we doubt that particular processor will ever surface.

Additionally, AMD has brought Zen 2 to the mainstream, the architecture behind the 3rd generation of Ryzen. And, according to the latest rumors, we could see up to 16-cores on the flagship, and clock speeds up to 5.0GHz. If there’s any weight to this, the processor world will shake when these next-gen chunks of silicon drop sometime in 2019.

Microsoft has also announced that its next-generation Xbox console, known as Project Scarlett, will utilize a custom-designed SoC based on Zen 2.

The first-generation Ryzen processors launched in March 2017 and continued to roll out throughout 2017. Ryzen 2nd Generation chips launched at around the same time the following year, on April 19, 2018, after being made available for pre-order a few days before.

Beyond the first few AMD Ryzen 2nd Generation chips, AMD continued to roll out some Ryzen Pro and Ryzen Threadripper chips through the rest of 2018. Ryzen Pro chips are designed for business and IT use cases, with up to 8-cores and 16-threads. Ryzen Threadripper 2nd Generation, the ‘big daddy’ of AMD’s 2nd gen offerings with up to 32 cores, is for die hard creative types.

AMD also announced a Ryzen 5 2500X and Ryzen 3 2300X, but at this point we don’t expect to see these mid-range chips make it to market. Intel’s Coffee Lake Refresh has been out for a while now, and Ryzen 3rd Generation chips have also hit the streets, having been announced at Computex 2019.

Even though AMD Ryzen 3rd Generation have been released, AMD may be releasing 50th anniversary editions of some of its parts, including the beloved Ryzen 7 2700X.

AMD made its second generation of Ryzen chips to be just as affordable as the first batch. Granted, offering more reasonably priced CPUs has always been AMD's edge. However, for the first time in years, the cheaper Ryzen chips could truly compete with, if not surpass, Intel's offerings.

AMD has decided to continue its course with the 2nd Generation models. It was important that it delivered affordable, high-performing CPUs. And, the price tags we’ve seen for the mid-range chips keep in line with the pricing for the first generation.

Of course, AMD had slashed its Ryzen prices across the board when they announced the 2nd Generation, keeping things competitive with Intel as the two companies fight for your CPU-buying dollars.

Ryzen 2nd generation processors offer an impressive generational leap over their predecessors. They're built using an updated 12-nanometer process, which will pack in even more transistors and thus provide more raw speed along the way.

According to AMD 12nm process results in an approximately 16% performance increase and 11% better lower power draw over the original Ryzen's 14nm process.

We finally came across rumors swirling around about the Ryzen 2nd Generation APUs, which will succeed the Ryzen 5 2400G and Ryzen 3 2200G. According to PCGamesN, the next generation APUs should be coming out in the next year, and will feature the same Zen+ 12nm architecture as the Ryzen 2nd Generation CPUs. This could mean APUs will see a similar performance boost as we saw when the first generation Ryzen chips were superseded.

And, now that we’ve been able to play with the Ryzen 7 2700X and the Ryzen 5 2600X, we know that AMD has succeeded in pushing its specs. The 2700X with its 8-cores, 16-threads and speedy boost clock of 4.3GHz outperforms the Intel Core i7-8700K, AMD has fully embraced the enthusiast market. Even the lower-end Ryzen 5 2600X pushes performance into the next generation with 6-cores, 12-threads and a 4.2 GHz boost clock.

Since these chips came out, they’ve been excellent entry-level and mid-range options, respectively, but seem to only be available in prebuilt systems.

We also saw a leak from ASRock pointing to the existence of some low-power E-series Ryzen 2nd Generation chips, the Ryzen 5 2600E and Ryzen 7 2700E. These chips will have a much lower 45W TDP and feature an 8-core design for the Ryzen 7, and 6-cores for the Ryzen 5 – according to the rumor reported by Wccftech. These rumors have since been proven true when they both launched in September of 2018.

However, it doesn’t stop with the desktop chips. AMD has also rolled out Ryzen 2nd Generation mobile chips in the Ryzen 7 2700U, Ryzen 5 2500U, Ryzen 3 2300U and Ryzen 3 2200U. These all have Vega graphics packed in, which means you can do some light gaming on them. The two higher-end chips are four-core, eight-thread processors with boost clocks of 3.8GHz and 3.6GHz for the Ryzen 7 and Ryzen 5, respectively.

The Ryzen 3 2300U and 2200U are four-core, four-thread chips with 3.4GHz boost clocks. The main difference between these two chips is that the former features stronger Vega graphics, while the 2200U has a higher base clock of 2.5GHz.

AMD has a very technical primer on Precision Boost 2 from its Ryzen Mobile Processor with Radeon Vega Graphics, in case you want to dig into the specs.

We've seen some SenseMi improvements in AMD's recent Ryzen-based desktop APUs, so it stands to reason that there are similar performance and efficiency increases in the Ryzen 2nd Generation line. That could include optimized power usage through Pure Power smart sensors and improved overclocking potential from Extended Frequency Range 2.

Anyone wanting to upgrade from Ryzen Gen 1 should be happy to know that AMD has kept the same AM4 socket intact, so you don’t have to buy a new motherboard to slot one of these CPUs into your machine. There is also an enhanced X470 chipset that’s optimized for Ryzen 2nd Generation with lower power consumption.

Keep in mind that AMD calls the heart of Ryzen 2nd Generation the Zen+ architecture, rather than Zen 2. What’s the difference? Well, Zen 2 is a completely new architecture built on a 7nm process, which – as you can imagine – offers a world of difference when it comes to power and performance.

AMD's roadmap shows the Zen 2 and Zen 3 (listed at "7nm+") cores coming somewhere between the release of the Zen+ and the year 2020, which we expected to appear in 2019. And it looks like Zen 2 has arrived along with Ryzen’s 3rd generation.

Zen 2 design is, naturally, complete at this point, and it "improves on Zen in multiple dimensions" according to AMD. And the Zen 3 is "on track," as well. AMD could be primed to shake up the CPU industry all over again with the Zen 2. However, Zen+ is what's powering the Ryzen 2nd Gen chips.

Even so, there are many reasons to be excited for the Ryzen 2nd Generation chips, especially if you’re in the market for a PC upgrade this year. And, even with Intel on the defensive, it’s safe to say that AMD has knocked it out of the park.