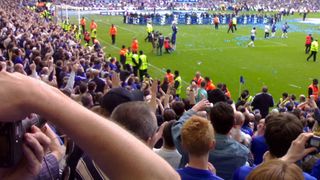 It's official: Amazon will be showing Premier League football on Amazon Prime Video in the UK from 2019.

The viewing rights to Premier League matches for the 2019/20 to 2021/2022 was up for tender and it was rumored that Amazon - and potentially YouTube - would get part of this package.

Amazon will be showing 20 matches per season, although these are set to be more midweek than prime-time weekend fixtures.

According to the official Premier League statement about the news: "Package F, acquired by Amazon Prime Video, includes the right, for the first time in the UK, to make available a full round of live Premier League matches."

In contrast, BT Sport will be showing 52 games a season and Sky Sports 128 games. While 20 games may seem like small fry, compared to what Sky is offering, it is a huge deal for Amazon and one that will likely mean Amazon Prime Video picks up a whole new audience away from TV and movie fans.

Amazon will also be showing a behind-the-scenes Premier League show to compliment the matches - all matches will be offered to Prime Video customers at no extra cost.

So what does an online giant like Amazon want with football streams? Well, if they can be packaged up alongside its Amazon Prime subscription service, it's another lure for those sitting on the fence as to whether sign up or not. And for the hardcore football fan, even making the football a premium bolt on on top of the annual Prime price may not be a turn off.

As a retailer, Amazon is said to enjoy twice as much return custom from those signed up to its Prime special delivery service compared to those who do not. So tempting the UK's large football following could be lucrative beyond even any streaming charges laid down.