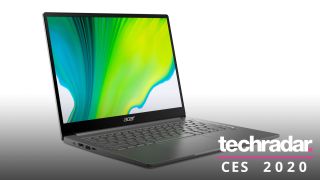 Acer has taken the wraps off a pair of new Swift 3 ultra-slim laptops at CES 2020, one of which is an Intel-powered Project Athena notebook with an Ice Lake CPU, and the other an AMD version running a Ryzen 4000 chip.

The Swift 3 model SF313-52/G is the Project Athena certified 13.5-inch laptop, meaning that it’s up to scratch for the standards Intel has laid out for thin-and-light notebooks which are seriously powerful, yet still have loads of battery life.

As such, it benefits from 10th-gen Intel processors – up to the Core i7-1065G7, which is a quad-core mobile chip capable of Turbo up to 3.9GHz and has Iris Plus integrated graphics. It will also have a discrete Nvidia GPU, but Acer hasn’t yet given us any clue as to which model that might be.

Interestingly, the 13.5-inch screen plumps for a 3:2 aspect ratio, meaning it’s slightly taller than a traditional laptop display, which Acer notes gives you 18% more vertical height, so you can see more of any given document or web page at one time. Suitably narrow bezels are present here, too.

The Ice Lake-powered Swift 3 is a touch under 16mm thick and weighs 1.19kg, meaning it’s nicely portable, and Acer further observes that it conforms to Intel’s Project Athena demands in terms of instant wake functionality and lengthy battery life.

In fact, battery life is claimed at up to 16 hours, according to MobileMark productivity mode testing, with a 30-minute fast charge giving you four hours’ worth of juice.

Other trimmings include wake-on-voice from standby with Cortana, an illuminated keyboard, a fingerprint reader, a Thunderbolt 3 port (among others), and Wi-Fi 6 support.

The AMD take on the new Swift 3 – model SF314-42 – is somewhat different in that it has a slightly larger 14-inch screen which is a traditional widescreen display (not 3:2 like the Intel machine).

In this case, the laptop is driven by a Ryzen 7 4700U, a new 8-core processor capable of boosting to 4.1GHz with integrated Radeon graphics (you won’t get a discrete GPU with this version, by all accounts). It’s just a touch thicker than the Intel notebook at 16.55mm, and it weighs a few grams more (but nothing you’ll really notice).

It also supports wake-on-voice, Wi-Fi 6, and benefits from a fingerprint reader for secure login. However, there’s no Thunderbolt 3 connectivity here (and note that Acer doesn’t give battery life estimates for the Ryzen machine, although it does say that both portables will have long-lasting batteries).

You can specify the laptop with up to 16GB of system RAM and up to a 512GB PCIe SSD.