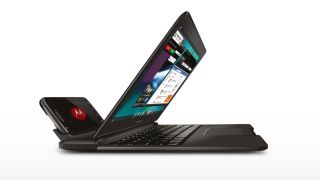 Will Google make another run at a Chromebook?

Android certainly doesn't need any help when it comes to the smartphone market, but tablets are another story.

However, a new report predicts that the search giant may be looking to its Motorola acquisition to help on this front.

Google's great white hope may lie in its $12.5 billion acquisition of Motorola -- and in particular, the manufacturer's LapDock accessory, which is capable of converting a smartphone into a notebook computer.

From LapDock to Google ChromeBook

Motorola's Android-powered Atrix 4G handset slips neatly into the LapDock accessory to convert it into a Linux-powered notebook, but the experience proved awkward and sluggish for many users.

The solution could be Chrome OS, which could breathe new life into Motorola's hardware while giving a much-needed boost to Google's sagging mobile OS.

With ChromeBooks priced around $420, a Google-Motorola tie-up around Chrome OS could see the hardware price plummet, since a required smartphone would handle most of the processing and data connectivity.

Chrome OS requires an Internet connection to bring the browser-based operating system to life, and where better to pull such data than from a user's existing smartphone?

The LapDock/Google ChromeBook is just speculation right now, but this could be a situation where companies and consumers benefit from this union.