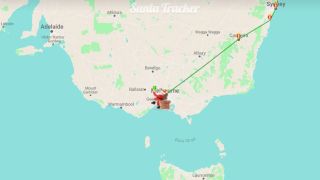 The Santa Tracker from Google is back in 2019 - and you can follow in real time where he is right now, delivering presents to all the good boys and girls around the world and giving helpful and fun facts about his whereabouts too - plus the chance to play some nifty mini-games.

How to play the Santa games on mobile

We've had a few people ask about how to find the Santa games on smartphone - if you're on a phone (and can't download the Android app) then tap the three lines in the top-left corner to see all the games, videos and coding lessions Google has created for kids and adults alike, or you can just keep scrolling down for more categorized titles.

The journey began at 2AM Pacific Time in Russia, and he's currently flying through the world chucking presents out at will.

If you want to follow jolly ol' St Nick, then there are a variety of ways to do so - the simplest is heading to Santatracker.google.com where you'll see him navigating his way across the globe, delivering presents to those who are naughty or nice. It functions well on mobile and desktop, and a quick click of the menu in the top left will give you access to all the mini games too.

If you're on an Android device, head to the Play Store where you can download the app and not only track Santa and also play those myriad games in his North Pole village.

Although designed for children (well, that's the pretence), there's a huge wealth of entertainment on offer (that adults will get lost in when 'researching' a story, including spending far too long on an Elf Wrap Battle or trying to do some basic coding to help an elf learn to dance).

Here are some of our favorite games so far (although it's worth noting that some of the games are a bit bug-filled on mobile or desktop - letting them settle for a few seconds can sometimes solve it):

This Battle Royale-style game sees you slinging your way around a forest, dodging behind trees and grabbing power-ups in the shape of presents. It's infuriating and slightly addictive - you need to master the tap (or click) to really make your way through it.

Try not to spend too long decorating Santa's beard and then sharing the results with friends. We have. We did this. We are sorry.

A basic matching of symbols behind Christmas doors, it starts easy then the timer starts to tick down... we went from scorn to annoyance at how hard it became before figuring out there was a pattern.

This is Where's Waldo (or Where's Wally, to the UK dwellers) on an interactive scale - an annoyingly diverting title.

Bounce the presents into the right hole by putting the building blocks in the right place - another one where our 'research' took us down a rabbit hole we didn't expect...

We don't like this one. It's too hard. It's a rhythm tapper, and it's too tricky and we assume it's designed for proper adults who are grown up. But we keep trying to work it out still...

The site has been live throughout December for parents and teachers alike to help their children be entertained while learning at the same time - you can code a snowflake or learn how to say 'Merry Christmas' in a new language, while there are also chances to learn about how different cultures enjoy Christmas each year.

More ways to talk to Santa than ever

You can use Google Assistant to communicate directly with the patron of presents (either using Google Assistant baked into you Android phone, the Google app on iPhone in some regions or a Google-enabled smart speaker), allowing anyone to say 'Hey Google, what's new at the North Pole' and hear the latest news updates from Santa's world.

It can also read Christmas stories for the young ones, with videos and written stories to follow along with on the Santa's Village mini-site.

Head on over to the site now to start following Santa across the world, and try not to let the games suck up most of the morning - like us, you've probably got a mountain of things to do before the big day tomorrow morning...