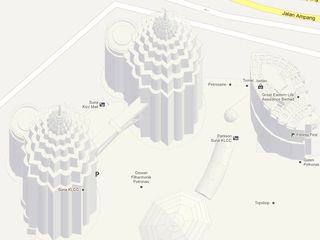 Google has updated its Google Maps application with more detailed 3D models of major landmarks across the world.

Many 3D models of landmarks already existed on Google Maps, but the revision sees many of the blocky models of old replaced with more detailed ones that make use of curves.

We can only assume that the Google team has been busy practising making models on its own SketchUp software.

The changes make for more attractive maps, but could also prove useful when navigating by making landmarks easier to recognise.

Software engineer Paul Messmer, highlighting the changes in a post on the Google Lat Long Blog said: "by combining 3D buildings with other Google Maps features like Street View and driving directions you'll have the most advanced "tourist map" on the planet."

On London's map, the Gherkin has got the curvy treatment, though it's hard to tell if there's been any change with Canary Wharf as it's not the most sculptural of buildings in the first place.