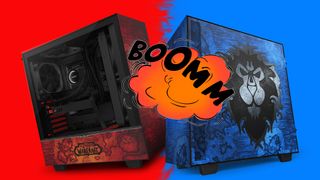 If you're dying to enter the Shadowlands in World of Warcraft, but need a new PC to get you there, you might want to go with a case that will let you represent. NZXT has just released a limited series in its CRFT lineup of licensed cases with both the Horde and the Alliance represented.

The new cases are selling for $199 (about £150, AU$290), with pre-orders available now and shipping expected in January. You can see the Horde case here and the Alliance case here.

Both cases come skinned in World of Warcraft style, with some maps of Azeroth as well as a backlit faction logo on the front of the case.

This is already a serious case for gaming, with two pre-installed fans. But these custom built chassis' let you show you're serious about your World of Warcraft faction as well.

If you really want to show off your Alliance or Horde pride, you'll have to be quick if you want to get one, as NZXT is only making 1,000 of each faction case. All we're wondering is who will win this Alliance vs Horde battle.

NZXT H510 Horde: $199 at NZXT
Lok'Tar Ogar! Show your Horde Pride with this custom PC case from NZXT. Based on the excellent NZXT H510, this World of Warcraft-themed PC case will be the prize of any Horde fan. But, you better act fast, NZXT is only making 1,000 of them. View Deal

NZXT H510 Alliance: $199 at NZXT
For the Alliance! This blue-themed PC case from NZXT is perfect for those that are still loyal to Anduin Wynn. It's based off of the excellent H510 from NZXT, so it's already an excellent PC case, this custom skin just makes it better. But, there's only 1,000 of them. View Deal

These cases are custom versions of the NZXT H510 case, which is already one hell of a case. They have a steel build and a tempered glass side panel. That will let you show off not only your faction allegiance but also your sick PC build.

The case is also designed to be kept clean. That starts with the built-in cable channels and straps, helping you keep your power and SATA cables tucked out of the way. There are also dust filters in the front panel and at the power supply intake, both of which are removable to clean off the dust they've kept out of your PC.

So basically, at the end of the day, this is everything you'd expect out of one of the best PC cases, but with the added bonus of being able to represent your WoW faction.