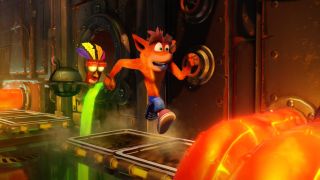 That new Crash Bandicoot game you've been hoping for? Well, if a recent leak proves to be accurate it's in the works. For mobile. As an endless runner. So it's possible it's not exactly what you were envisioning.

The leak appears to have sprung from some Facebook ads which have since been plastered over Twitter. If these ads are the real deal then the game is the project of King, the Candy Crush developer that's owned by Activision.

The images tell players they can “run, jump and slide” through levels as well as build their own base, which does suggest it's at least a little more involved than just level after level of running.

CRASH BANDICOOT MOBILE GAME REVEALEDinvestigation by myself and @Motwera This game can be signed up for NOW it seems.The way the link was found was by searching the name on FB after previously being a fan of the FB page tied to the Brazilian ads.https://t.co/98Qq3jkJCZ pic.twitter.com/AE6bPek4rqFebruary 7, 2020

Further evidence was spotted by Kotaku who snapped a screenshot of a description of the game which appeared on Storemaven for a short period of time. This goes into further detail than the images, highlighting the need to avoid TNT crates on your run while collecting wumpas and spinning through crates for rewards. It even mentions teaming up with Coco to save the multiverse.

While it's not perhaps the dream way to play the next instalment of Crash, an endless runner does suit the character and the franchise to some extent. It's not the first time Crash has starred in a mobile title either so there's precedent.

Besides that, the creation of a mobile game doesn't mean there aren't further Crash titles coming to other platforms. With Activision making it clear in its recent financial call that it intends to continue down the route of remasters and reimagined experiences in 2020, it's possible there's more Crash in store in the future.

As it is, since this mobile game is just a leak at the moment and hasn't been confirmed by Activision, there's no certainty with regards to when, or even if, we'll see it. It's just a case of waiting for some more official comments from King and Activision.