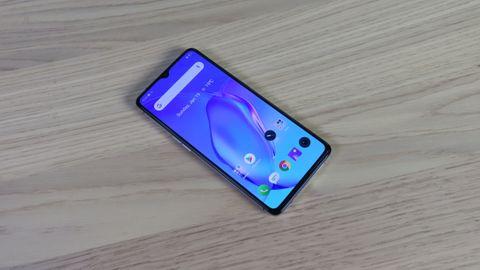 With a versatile camera setup, flagship specifications and a high refresh rate screen, the Realme X2 Pro is a power user’s dream. However, cartoonish look of the UI and image quality issues hold it back from greatness.

Realme mobiles has finally launched in the UAE, and one of its flagship products is the Realme X2 Pro. It's a strong start for the company in the region, as Realme seeks to make its entrance in the premium mid-range segment.

However, a phone is more than a mere list of specifications as it also has to be usable, trustworthy, and dependable in our daily lives. Not to forget the equally capable competition that’s ready to pounce on this newcomer. So does the X2 Pro have what it takes to succeed?

The Realme X2 Pro is available exclusively on Amazon.ae in Lunar White, with the configuration of 12GB of RAM and 256GB of storage.

We received the Lunar White color variant of the Realme X2 Pro for review which is quite an eye-catcher. It has this pearl-like gradient effect which changes color just slightly in the light. It isn’t excessive like some of the other gradient finishes marketed by other manufacturers and has certain decency about it that’s not in-your-face. This is a model that will be just as happy in a boardroom as sitting comfortably in your pocket.

The aluminum chassis and the glass on the front and back certainly feel solid enough, with little to no flex when pressure is applied. It weighs 199 grams and the balance is quite good too if slightly weighted towards the top. The phone can get a bit slippery, so one-handed usage without the included case isn’t a good idea.

Something slightly odd is the space where the glass meets the metal, where the edges are a little sharp, showing that there isn’t quite as much attention to detail as there may appear to be on the surface.

Certainly, the included case should be slapped on immediately, however, this is a necessity for any modern glass sandwich. For a first stab at ‘premium’, in the mid-range, this is a solid effort, and Realme should be commended for its work.

The top of the screen houses a small teardrop notch that is easy to disregard, and a USB-C port is welcome and present on the bottom. There's also the headphone jack, which is a rare sight to see on any modern-day smartphone.

Those looking to expand the storage will be out of luck, as the X2 Pro lacks a microSD card slot. At the higher storage configurations, this will likely not matter, but for those with the 64GB version, it is certainly an important consideration.

The screen measures 6.5 inches diagonally, so one-handed usage is best attempted by those who have large hands. The display uses a Super AMOLED panel with Full HD+ (2400 x 1080 pixels) resolution and a 90Hz refresh rate. The display is certified for HDR10+ playback and supports a 100% DCI-P3 colour gamut range.

The screen gets bright enough as it is rated for 1000 nits maximum brightness and has decent legibility in sharp sunlight. There are two colour modes for users to choose from - Vivid and Gentle. The Vivid colour mode is based on DCI-P3 colour range, while the Gentle mode represents sRGB colours.

The colour reproduction isn’t bad, but the panel seems to have an unrealistic representation of elements and scenes in the Vivid mode. The screen protector is unpleasantly plastic and can make the feel of the device a little cheaper than the price tag might suggest.

Overall, the screen on the Realme X2 Pro may not match up with the best in the market but is more than enough to compete with the competition at this price point.

Another major highlight of the Realme X2 Pro is its quad-camera system which provides a great deal of versatility to a casual photographer.

The primary camera uses a Samsung ISOCELL Bright GW1 64MP sensor with an f/1.8 aperture in a quad-bayer arrangement. This means that ‘normal’ photos are produced at 16MP, in daylight and low light.

The sensor is capable of reproducing images at 64MP with the dedicated ‘64MP’ mode and the results are astonishingly detailed when taken in a good light.

As for the general performance, there is no cause for complaint. Images are colorful and have a decent representation of detail, however, we found a decent amount of grains in some pictures especially around the edges in the ultra-wide mode.

The HDR mode does a decent job of recovering detail from shadows, however, we found that ‘Chroma’ mode cooked colors a little too far for our liking. It does make for a boost in colour temperature, but in certain situations, images have only a passing resemblance to reality.

The 13MP, f/2.5 aperture telephoto lens performed adequately while the 8MP ultra-wide-angle lens left more than a little to be desired. As mentioned, some of the pictures came out to be smudgy with bland colours, so we wouldn’t recommend expecting too much from this particular aspect of the X2 Pro.

The quad-camera setup can take excellent images in well-lit conditions and the overall experience remains very positive. Having said that, the company needs to work on its image optimization algorithms and make it more efficient for night-time photography. Due to the lack of Optical Image Stabilization (OIS), when Night Mode is required, noise becomes more evident and details are all but lost.

It isn't a deal-breaker by any measure, however, it shows the weakness of the device when compared to the likes of the Google Pixel 3a, which is a better camera phone at almost the same price. But you lose out on the blazing fast performance that is delivered by Qualcomm Snapdragon 855 Plus.

Next Page Under the hood, Battery life and Final words