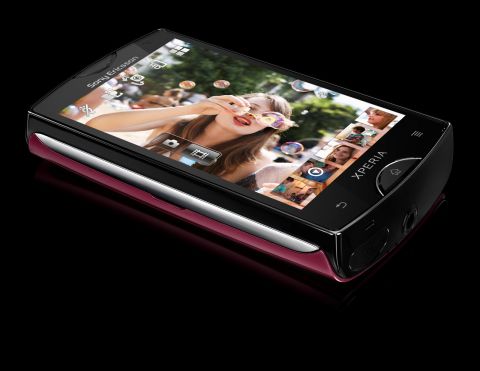 Surprisingly powerful, with a versatile and well designed user interface. There are many good things in this small box.

Before the arrival of Sony's Ericsson's new Xperia Mini, the X10 Mini and X10 Mini Pro were an odd little couple, launching in mid-2010 with Android 1.6 and a bespoke and heavily-customised user interface on top.

They weren't amazingly powerful phones and their 2.55" screens were shockingly small - but Sony Ericsson did a good job of maximising the available space with its corner-based interface.

The same system has returned in 2011's updates, albeit improved thanks to Sony Ericsson's developers having another year to fiddle with the interface and add more new layers of social integration.

We've got some real-life footage of ACTUAL people using the phone - check it out if these grouped-together letters are too much:

The new Xperia Mini is available SIM-free for just over the £200 mark, with monthly contracts popping up starting from £15. While there are certainly plenty of more powerful Android phones with bigger screens available for that kind of money, there's not much competition in the matchbox-sized ultra-portable smartphone scene.

In fact, Sony Ericsson's got this part of the market all to itself. But is the tiny Xperia Mini one big compromise?

The 2011 models have upped the tech specs significantly from what we found in the X10 Mini and X10 Mini Pro. As well as a new 1GHz processor, the Xperia Mini now comes with a larger 3" screen, utilising the same Bravia Engine Reality Display technology as Sony Ericsson put in its superb Xperia Arc.

In reality, what this means is you get a small 3" capacitive display running at 320x480 resolution. It's surprisingly sharp and bright, though, with icons and text easily readable even outdoors in bright light. It's no game-changer in terms of resolution, but it's certainly a usable display despite its size.

The power button sits on the top edge of the phone. The left-hand side is featureless apart from an arbitrary silver strip, while the other edge has the volume up/down rocker and a very nice, soft-touch camera button.

The shutter button isn't quite as silky-soft as the one found in the HTC Salsa, but it's still spongy enough that you don't have to press too hard and blur your snaps in the process.

Sony Ericsson has torn up the design rules and placed the 3.5mm headphone jack on the bottom of the phone, which is also where the USB connector sits.

There's not much clearance between USB and headphone sockets, though, which makes using right-angled USB connectors and listening through headphones a bit of a pain without some extreme and worrying cable bending. But Sony Ericsson has put a straight USB cable in the box, so that's OK - plsu we're talking about a pretty specific instance here.

In the hand, it's obviously very, very small when held up against some of today's mammoth smartphones. But it feels good. The big, physical Home button is easy to find without fuss, while the new capacitive Back and Menu buttons are large and easy to find without having to think about it.

It also looks smarter and sharper than the old X10 Mini, with the removal of the silver button strip making the Xperia Mini appear a little more stylish.

Above the screen sits a proximity sensor, allowing the phone to deactivate its touchscreen while making a call, to stop you embarrassing yourself by pressing "end call" with your ear.

The back has a nice, matte, rubberised coating, so it's grippy and sticky in the hand. Despite its size, the Xperia Mini is a perfectly usable smartphone. The 3" screen is responsive to the touch, with even the lightest press registering, while it feels solid and tough enough to survive a day or two of being in the same pocket as your keys.