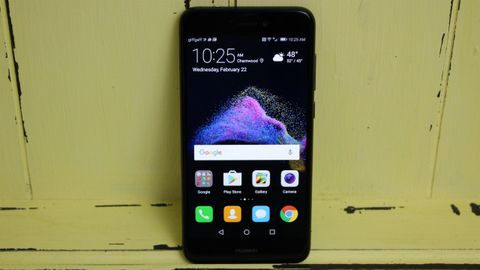 Despite the full HD screen, the Huawei P8 Lite 2017 has more staying power than we expected.

The non-removable 3,000mAh battery was more than adequate when it came to getting us through a full day, and on some days we were able to eke more than a day's usage out of a single charge, provided we kept demanding tasks at a sensible level.

Despite the fact that it uses the old micro USB standard, the 2017 P8 Lite supports Huawei Quick Charge with an output of 9V/2A – just like the previous model – so you can fully top that power cell up in around an hour.

During our standard battery test - in which we run a 90 minute video with full screen brightness and accounts syncing over Wi-Fi in the background - the P8 Lite lost just 20% of its total battery life.

This indicates solid stamina and puts it on par with, and even slightly ahead of, rival phones in this price bracket.

While it may lack the dual-camera appeal of the Honor 6X, the P8 Lite 2017's 12MP snapper is still pretty agreeable for a device in this price range.

The sensor comes with a decent autofocus, but no optical image stabilisation. That means that while the phone is relatively quick to lock onto your subject and capture the image, photos and videos are prone to camera shake.

As with most cameras, performance drops when you're shooting in darkened environments, with focus time increasing and camera shake becoming more of an issue.

But in good lighting the results aren’t bad, and stand up well to similarly priced handsets, with plenty of detail and accurate colours on show.

For selfie addicts, the P8 Lite 2017's front-facing 8MP camera is more than up to the task of capturing your best duck face, while both cameras are capable of recording 1080p video. They can’t match the 4K footage you’ll be able to capture on some phones, but we wouldn’t expect that at this sort of price.

Swiping from left to right over the viewfinder reveals a large menu packed with options, the most interesting of which is the 'pro' photo mode, which allows you to mess about with settings such as white balance and ISO.

As is the case with Samsung's phones, it's possible to download more shooting modes to augment this already impressive selection.

Prev Page What's it like to use? Next Page Verdict and competition