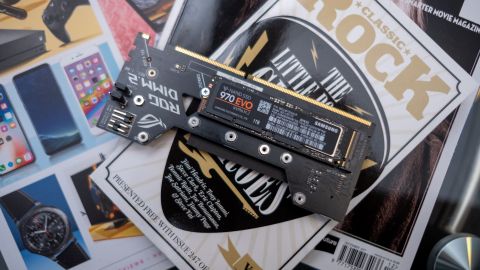 For the last few years, Samsung’s Evo family of NVMe solid-state drives have been ranked as the best SSD by us and many other publications in the industry. Though these drives have never been the fastest, they’re hardly the most expensive – putting them in a middle ground for flash storage that’s five times faster than a typical SATA drive while still being affordable.

Three years and an equal number of iterations later, the Samsung 970 Evo continues to hold onto that crown yet again. With vastly quicker sequential write speeds, this is incredibly fast nevertheless even compared to most modern NVMe drives.

The prices of Samsung’s NVMe drives have been going down steadily with each successive generation, and thankfully that trend continues with the 970 line – though, you’ll have to get into the one terabyte capacities to start noticing a discernible price drop.

Of course, the real comparison between all of these drives comes down to speed. The Samsung 970 Evo runs with the fastest sequential read speed of 3,500 MB/s and sequential write speed of up to 2,500 MB/s – dramatically faster than the 960 Evo’s top-rated 3,200MB/s and 1,500MB/s sequential read and write speeds.

This is largely thanks to Samsung’s mid-range drive adopting nearly the same 64-layer MLC V-NAND technology as its higher-end Pro brothers. Previously, the 960 Evo was built with a more affordable, but slower, form of TLC V-Nand. The updated Pro and Evo drives also share a newly designed Phoenix controller.

Topping that off, the Samsung solid-state drives also employ Intelligent TurboWrite technology to generate a large buffer of up to 78GB for even faster write speeds. With all of these improvements, Samsung claims the 970 Evo delivers 65% faster sequential write speeds.

Though it doesn’t feature a fancy heat sink, like the Adata Gammix S11, Samsung does include Dynamic Thermal Guard technology to safeguard against overheating. The built-in hardware feature automatically monitors and maintains optimal operating temperatures, while a heat spreader and new nickel-coated controller further lower the SSD temperatures.

The Samsung 970 Evo’s dramatically faster write speeds look impressive on paper, and in our testing it proves to be as quick as it claims. The SSD actually peaks above its rated speeds despite us running the drive against our toughest Q-depth 32 CrystalDisk Mark benchmarks. All of the drives read and write speeds far outpace the 960 Evo – and even the higher-end Samsung 960 Pro.

This, topped off with slightly higher random write speeds, enables the 970 Evo to transfer a 10GB file in nearly half the time compared to its predecessor. Folder transfers see an even greater improvement reducing the amount of time needed from 25.2 seconds to 12.64 seconds.

Like a starter Pokemon, the Samsung 970 Evo has reached its full potential with its third evolution. Thanks to multiple improvements in the silicon, this drive is reads and writes faster than ever, can run for longer without overheating and is more affordable than ever at large capacities. For these reasons, we rank the Samsung 970 Evo with a perfect score and our Best in Class award.