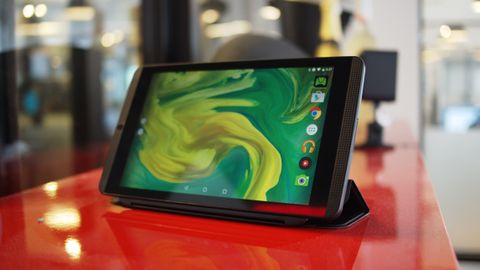 Miss the Nexus 7? Me too. Thankfully, Nvidia's fills the void perfectly with this stellar tablet. It offers a killer value, solid performance and exclusive features.

Update: If you look away for just long enough, Nvidia usually slides in a worthwhile to its recommended Shield Tablet K1. And exactly that has happened with its recent update to Android Nougat.

Now, the tablet has all of the latest features available on Android, such as multi-window mode, enhanced Doze to save you battery life both at night and when you're on the go.

When Nvidia first showed off its Shield Tablet in 2014, we were a bit unimpressed. After all, Android tablets were coming out in droves and it was rather difficult to stick out when Google's own Nexus 7 was putting them all to shame. Plus, the original Shield clamshell was more unique, even if it wasn't the best-looking device.

The landscape looks a lot different now. Google itself has moved on to making larger tablets to compete with Apple's iPad, and most of the market has generally dialed back its focus. So, when Nvidia announced the Shield Tablet K1 in late 2015, I was actually pretty interested.

Here, we have an 8-inch tablet with a respectable screen resolution of 1,920 x 1,200. It fits nicely onto my palm and rocks an understated look that completely hides away its DNA, which is thoroughly steeped in green gaming goodness.

The Shield Tablet K1 exists in a world without the Nexus 7 to hold it back, and based on looks alone, this might as well be the next Nexus tablet. It rocks a simplistic look and packs in nearly every feature that you might want. Dual speakers, microSD, good battery life and fast specs are all here. Plus, you might even think you're using a Nexus tablet based on how clean the Android Nougat interface is.

Nvidia's latest iteration of the Shield Tablet is one of the few Android devices to adopt the latest operating system and it, more or less, feels like a stock Android experience.

Best of all, the K1 is cheaper than the last iteration of the Shield Tablet and is more powerful than ever. At $199 (£149, about AU$261,) the Nvidia Shield Tablet K1 is the tablet to buy if you're looking for the near-perfect balance of value, power, features and looks.

The backside of the Shield Tablet K1 is coated in an anti-slip surface, which does its job just fine, but easily collects fingerprints in the process. Sharing the matte-textured back is the rear 5MP camera and the shiny "Shield" logo embossed in the center.

On the front of the tablet we have a front-facing 5MP camera and two front-facing speakers. While the speakers are not going to blow away dedicated Bluetooth speakers, like the JBL Charge 2 or UE Boom 2, they sound excellent for being such a small tablet. In addition to the speakers, the Shield Tablet has a 3.5mm headphone jack up at the top for private listening.

All of the Shield Tablet K1's ports are located on its top, with its buttons running along the upper right hand side. And as this tablet lacks any physical face buttons, it can be tricky at times to tell which way you should grab it to power it on or adjust the volume. I found that the front-facing camera is a good point of reference.

The ports include micro USB, mini HDMI out, and a microSD card slot capable of taking up to 128GB cards. The Shield Tablet K1 offers a volume rocker and a power button, which are a little difficult to find and press without looking, unless you're totally acclimated with the layout.

A subtle, but noticeable difference in the K1 is the rubberized speaker grilles. Not too sure what Nvidia's thinking was in doing this, but it's not a bad move. That said, they do attract a ton of fuzz. Also, extending from the speaker grilles, Nvidia has ditched the shiny, slanted plastic edge.